A Trio of Short Reviews

A trio of books, all by New Zealand authors:

Ten Acceptable Acts of Arson: and other very short stories, by Jack Remiel Cottrell, is a collection of flash or micro fiction; the longest stories are a page and a half, most stories are less than a page, some are just a sentence or two. Perfect for dipping into while waiting for the bus, or on hold with the bank’s help line.

It is a bit of a mixed bag. Some of the stories don’t quite work, or aren’t fleshed out enough to be engaging—ideas I would have shoved in the plot-bunny drawer to expand on later. But the format lets the writer cover a lot of ground—fantasy, sci-fi, horror, politics, sports, religion, and more—in ways that are both fun and surprising. Some of the stories that did work were splendid, and pack a punch in a small space. I will be looking forward to seeing more from this writer.

Here are titles of a few of the stories that I found particularly amusing, or that kept me thinking long after I’d put the book down. Note that the descriptions are my synopses, not the stories themselves!

You will probably have different favourites. Go find a few for yourself. 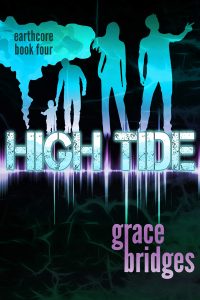 I’ve written about Grace Bridges’ YA Earthcore fantasy series in earlier posts (RotoVegas and Volcano City). The 4th entry in the series, High Tide, foregoes the paper-thin megalomaniacal villain of the earlier books, and the story is, in my opinion, stronger without him.

The starting point is when Maori elders on an island near Auckland call in the Earthcore team to investigate a series of earthquakes that don’t follow any established pattern. The team dig into long-forgotten tunnels under World War II gun emplacements, and have to deal with cave-ins, people lost in the tunnels, and two girls trapped in a cave at the tide line with the tide rising. The enemies in this story are time and upset taniwha, with the tension rising the longer the Earthcore team is underground.

There are a few too many people to keep track of easily, but I like stories emphasising teamwork, and this is a good entry in that category. 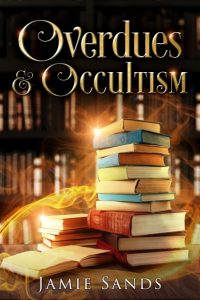 I’m a sucker for stories with librarians as the romantic leads. What can I say?

In Jamie Sands’ Overdues and Occultism, Basil, a librarian, and Sebastian, a ghost hunter, fall for each other while searching for the secrets behind a haunted library in the Mount Eden suburb of Auckland. This is another novella in the Witchy Fiction brand, which I have reviewed a few of before, and it’s a short, sweet, and charming M/M romance. There’s a sequel available, too: Monsters and Manuscripts, where Basil and Sebastian continue their adventures with a monster that likes chocolate biscuits.

This entry was posted in Fantasy, Kiwi author, LGBTQIA+. Bookmark the permalink.