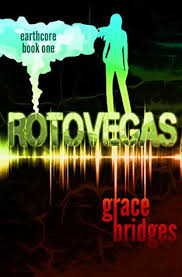 Strange things are going on in the New Zealand resort town of Rotorua. Tourists targeted in a rash of pickpocket incidents seem dazed, unable to give a clear description of the thieves. Ghostly visitors drive a family out of their home. And Anira, a teen settling in for a week’s holiday with her mum and younger brother, has her perceptions enhanced and her mind thrown into overdrive when breathing the steam from a hot springs in their campground by the lakeshore.

Anira hadn’t wanted to go to Rotorua at all. She would rather have stayed in Auckland. But her mum had insisted, and once in town Anira soon finds others who have superpowers apparently bestowed by Rotorua’s sulphurous waters. Among them are a teenage boy with eyesight good enough to pick out details on the far lakeshore, a young mother who can make fire in her bare hands, and a retiree who can run across the surface of the lake. Anira brings them together, insisting they need to know why have been so blessed. Calling themselves the Earthcore, with Anira as their de facto leader and the blessings of a local Maori iwi (tribe), they step up to the challenge of thwarting the schemes of the mysterious Mr B, who seems to have a serious grudge against the entire town.

Unfortunately, Mr B is the weakest part of RotoVegas, the first book in the YA Earthcore series by New Zealand author Grace Bridges. He’s a cardboard villain, with no apparent motivations other than unreasoning hatred and standard evil-overlord megalomania. Moreover, his own superpowers don’t make a lot of sense. If the Earthcore team’s superpowers are gifts of the taniwha (spirits from Maori myth), then who bestowed a very powerful gift on this man they disapprove of?

I had another negative reaction to a minor plot point: when Anira decides to stay in Rotorua at the end of the week with someone she’s just met and her mother didn’t know, her mother doesn’t object. Would I have let my mid-teen daughter do that? Not a chance, especially when she appears to be in the throes of her first romance. Even if she were staying with someone we knew well and trusted, I’d leave with a fervent ‘Dear God, give her more sense than I had at that age.’

Aside from those problems, there are several things I like about RotoVegas:

Audience: Fine for teens, and a clean, fun, light read for adults too.