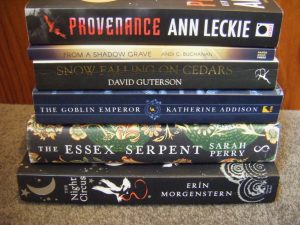 The Icelandic tradition of Jólabókaflóðið (literally, Christmas Book Flood) warms my heart, since it involves settling into a comfortable spot,eating chocolate, and reading books. The custom, as I understand it, of giving books (books are, apparently, the default Christmas gift) comes from both Iceland’s long literary history and, more recently, from limited imports of nearly everything but paper during World War II.

Christmas is almost on us, but it’s still not too late to encourage spreading this tradition, and given the state of the world, enjoying Jólabókaflóðið may be the most sensible thing to do in 2020.

With that in mind, here are the books—some old, some new, some well-known, some obscure—that were most memorable for me this year. In no particular order, they include

This entry was posted in A Writer's Life, On Reading. Bookmark the permalink.