The Clockill and the Thief 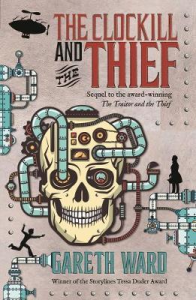 Sin, street urchin turned trainee spy, is back in Gareth Ward’s YA novel, The Clockill and the Thief, the sequel to The Traitor and the Thief. Both books won New Zealand’s Sir Julius Vogel award for Best Youth Novel in their respective years. Like the first book, The Clockill and the Thief is a rollicking good ride as we dive deeper into Ward’s steampunk world filled with mad scientists, strange and awesome weaponry, and a global order hanging in the balance, dependent on the actions of Ward’s intrepid fourteen-year-old protagonist.

Most of the action in this instalment takes place in the air. An early scene shows Sin and the other Covert Operations Group (COG) trainees getting lessons in handling airships, including vertigo-inducing exercises in walking on the outside of the gas envelope in boots that clamp onto the ratlines. Sin tangles with old enemies, including the Fixer, his boss from his days as a member of a street gang, and Eldritch Moons, the traitor from the first book. When Eldritch steals an airship, the COG team takes off in pursuit, and have to deal with fires aboard ship, attacks by sky pirates and the creepy mind-controlled clockill, and other hair-raising adventures. Meanwhile Sin is struggling to keep secret his dependence on a hard-to-acquire medication, a result of the medical experimentation in the previous book. His medication is rapidly losing its efficacy, and when his supply is stolen, Sin’s days are numbered. Or are they?

Friendships are an important aspect of this story. It’s clear to both the reader and Sin that he couldn’t have accomplished what he did without help from the other COGs: Stanley, another recruit from the Fixer’s gang; Zonda, his most supportive teammate; and even Velvet Von Darque, the class snob. Sin’s relationship with Zonda is strained over friction with a team member Sin considers an incompetent coward, but they stand up for each other when it matters. His and Zonda’s relationships with Velvet continue to be complicated, and interesting.

Obviously, I read the two books in order, but I think The Clockill and the Thief would work as a standalone. You don’t need all the history to recognise Eldritch as a villain, or Velvet as a frenemy. My biggest beef with it is that Sin and his teammates just aren’t quite believable as kids in their early teens. Early twenties, yes, maybe even late teens, but fourteen-year-olds? Um, no.

The story also requires a great deal of wilful suspension of disbelief, somethings eye-rollingly so. If you have trouble with that, dial back your age. Remember, the primary audience is teen and pre-teens.

Ward’s writing is fast-paced, full of snappy dialog, narrow escapes, and sharp details that left me with vivid images of technical marvels and heroic action.

Looking forward to the next instalment.

Audience: YA primarily, but a fun, light read for adults, too. Some violence but no sex or foul language.

This entry was posted in Children's Fiction, Fantasy, Kiwi author. Bookmark the permalink.