The Ten Thousand Doors of January

Posted on 5 December 2020 by Barbara Howe 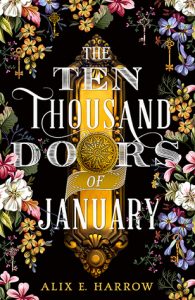 January Scaller, a seven-year-old girl with coppery-red skin, finds a Door and slips through into another world. She’s called back into this one by her guardian, Mr Cornelius Locke, who destroys the Door and does his best to drive all thoughts of it from January’s head. She is, he claims, a difficult child—too difficult, certainly, for her grim, rigid German nanny—and overstimulated, in need of a calm, structured environment without distractions.

This is the beginning of The Ten Thousand Doors of January, by Alix E. Harrow, one of 2020’s Hugo contenters for Best Novel. January has no mother; Locke employs her father, Julian Scaller, to roam the world for him, looking for archaeological discoveries (or, in less euphemistic terms, grave robbing, among other things), leaving her in Locke’s care. When Locke shuts January away for three days in a bedroom stripped of all colour and entertainment, I was rooting for January to stage an epic rebellion scene. But no, she really does love Mr Locke, and meekly settles down to be an obedient, good little girl.

The story then skims briefly over the next ten years, until January is seventeen. January’s father disappears, and she finds a book titled The Ten Thousand Doors by Yule Ian Scholar. This book within a book talks about Doors and describes the travels of January’s mother and father, separated by closed Doors, as they search for each other across multiple worlds. The two stories are told in alternating chapters, with January’s father’s story being the more typical portal fantasy, concerned with exploring exotic worlds, and the transformations the characters go through while there. January’s story, on the other hand, is more about the nature and control of the Doors themselves, with January discovering her abilities as a Wordworker, who can open closed Doors and create new ones. This puts her in direct and potentially deadly conflict with Mr Locke and his New England Archaeological Society (NEAS), who are bent on closing all the open Doors.

The alternating chapter format, unfortunately, breaks the narrative drive, and the structure is a bit convoluted, so the story bogs down quite a bit in the opening chapters. The flowery writing style doesn’t help keep the momentum going, either. It’s beautiful in small doses, but it does amble a bit, and frequently has more the languid feel of a memoir than the immediacy of a well-paced novel. On the other hand, it did work very well for producing a vivid impression of Yule Ian’s world, once we get there.

When January openly rebels against Mr Locke—finally, nearly a third of the way in—the story takes off, and then there are narrow escapes, a harrowing sojourn in an insane asylum, and enough other adventure to make up for the plodding beginning.

The moral of the story is pretty obvious, and the political message is overt and heavy-handed. Open Doors represent possibilities for positive change and growth; closed Doors represent stagnation and suffocation. The members of the NEAS aren’t simply ordinary people frightened of and resisting changes they don’t understand; they are wealthy, greedy, egotistical criminals who have benefitted hugely from the open Doors, but who will destroy them rather than let anyone else reap those benefits. Hissable villains certainly, but a bit more nuance would have been more satisfying.

There were a couple of other things that bothered me:

Despite those problem, by the time I was halfway in I was glad I had stuck with it. There’s a lot to like: January’s friend Samuel, who gives her pulp fiction and a puppy; the dog, Bad, who is good dog; and January’s mother, who is definitely not passive. Neither is the ferocious Miss Jane Irimu, successful ogre hunter, with two husbands and a wife. And most importantly, there is January herself, and her growing confidence in her abilities as she discovers the power of her pen.

1 Response to The Ten Thousand Doors of January