Posted on 1 February 2020 by Barbara Howe 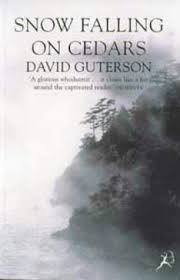 The time: December 1954. The place: a courtroom in a small town on an island in Puget Sound. Kabuo Miaymoto, the American-born son of Japanese immigrants, is on trial for the murder of Carl Heine, an American of European descent. Both men, along with the community’s other salmon gill-netters, had spent the night of 15 September in their boats out in the fog-bound sound. One of them had a problem with his boat, and the other came by to help. In the morning, Carl’s boat was found drifting. In the water, his body is trapped in his own net. The medical examiner’s verdict: he went into the water and drowned after receiving a serious blow to the head.

Carl and Kabuo were World War II veterans who reluctantly became fishermen to make a living, but both wanted to retire from fishing and grow strawberries, the local cash crop. The two men had been friends while growing up in the 1930s, but—according to the prosecutor—had recently come into conflict when a tract of land came up for sale, and both men tried to buy it. Carl wanted it because it had been his family’s farm—his widowed mother sold it against his wishes while he was away at war. Kabuo wanted a subsection, seven acres (out of thirty-five), that his father had been buying from Carl’s father. It had been almost paid off, but the forced relocation of Japanese immigrants to internment camps derailed their ability to pay. When Carl’s father died, his mother returned the Miaymoto’s money and sold the whole tract to another farmer, for a higher per-acre price. Kabuo, understandably, felt they had been cheated.

The local newspaperman, Ishmael Chambers, watches the trial closely. Another veteran, he lost an arm in the Battle of Tarawa against the Japanese. He is basically a decent, honourable man who has become embittered by the war and unrequited love for Kabuo’s wife, Hatsue. It is his conscience that becomes the linchpin on which this story turns.

Snow Falling on Cedars, by David Guterson, is a mix of mystery, courtroom drama, police procedural, and exploration of the hidden passions of the human heart. The courtroom scenes are the weakest part, as there are no courtroom fireworks; the trial serves mainly as a framework on which Guterson hangs extended flashbacks showing the police work and the history of the relationships among the four major characters (the three men plus Hatsue).

The mystery is well-done, and more satisfying—both in terms of the mechanics of how Carl’s death came about and in the believability of the characters’ actions—than most genre efforts I’ve read recently, but it is much more than a simple mystery. It is a deep dive into a number of things, including rural island life mid-century and the hardships Japanese-American experienced, particularly after Pearl Harbour.

Prejudice plays a part in the story, specifically in the way Carl’s mother treats the Miaymotos, and more generally in random ugly behaviour by small-town louts, but the tone of the book overall is rather more optimistic. Not everyone in the community is equally culpable. Carl’s father deals fairly with Kabuo’s father, Ishmael’s father keeps printing opinion columns in the paper urging tolerance and fair play despite threats and cancelations, and the president of the local Gill-Netters Association won’t let the prosecutor bully him into making prejudicial statements on the witness stand.

This is a splendid book, but if you are looking for a fast-paced mystery, look elsewhere. This is a dense, slow-paced, non-linear story, weaving back and forth between past and present. At several points I got tired of the masses of seemingly irrelevant detail. Do we really need to know about the defence attorney’s sex life, or lack thereof? Several times I put the book aside, thinking it would end up in the Did Not Finish pile, but I kept coming back to it because I wanted to know what happened. I’m glad now I did. Yes, there is a lot of detail here, and some of it could have been trimmed, but I don’t remember any other book I’ve read in the past year that has left me with as strong a sense of place, or with mental images that are as vivid. From the fog on the sound to drizzle dripping through the cedars, from fruit pickers squatting beside strawberry plants to windshield wipers fighting a losing battle with snow and ice, this book is full of sensory detail. A slow reading pays off.

Audience: adult. Explicit sex, swearing, and carnage on the beach at Tarawa.