From a Shadow Grave 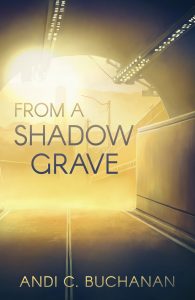 Seventeen-year-old Phyllis Symons was murdered in 1931, struck on the head and then buried alive in fill from the excavation of Wellington’s Mount Victoria tunnel*. That historical fact is the springboard for From a Shadow Grave, by New Zealand author Andi C Buchanan. This novella is divided into four chapters, with the first imagining what Phyllis’s life might have been like in a sequence of events leading up to her murder, and her shadow existence afterwards as a ghost. Our sympathy is drawn for a poor, not well-educated, probably dyslexic girl struggling to find her way among the constrained economics of the Great Depression. The author evokes sympathy for the ghost, too, a lonely spirit stuck forever on Mount Victoria:

But this isn’t simply a ghost story. It’s more about what-ifs and possibilities. The first chapter is the starting point for the other three, each one a different direction the story could have gone after Symons’s burial.

In the first alternative, it is eighty years later, and a young Maori woman named Aroha Brooke climbs Mt Vic, looking for Phyllis. She promises to break the bond tying the ghost to her death site, in exchange for Phyllis’s help in fighting something much more menacing than a ghost.

In the second alternative, Aroha travels back in time, hoping to find Phyllis before she suffocates.

The speculative fiction elements are less significant in the third alternative, which is more about ordinary human determination and acceptance. Aroha reappears, but only as a minor character. The focus is on Phyllis, who grows into a more active player in her own story.

From a Shadow Grave is poignant and beautifully written, enough so to overcome my dislike of second-person narration. (You do this, you feel that, …) I wish we had learned more about what drives Aroha, but that’s a minor quibble. It’s a lovely story as is.

*Paying tribute to her ghost is the explanation often given for the annoying tradition of drivers tooting their car horns in the tunnel.

This entry was posted in Kiwi author. Bookmark the permalink.