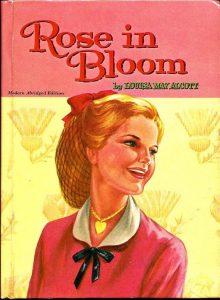 The flurry of news articles about the latest movie adaptation of Luisa May Alcott’s Little Women prompted me to pull one of her less well-known novels off my bookshelf. I’ve read Little Women and its sequels, Little Men and Jo’s Boys, but it’s my copy of Rose in Bloom that’s falling apart from overuse. Maybe it was because I read Rose in Bloom first, or I was just at the right age to be captivated when I read it, but it was the pairing in that novel that thrilled my young teen heart, and became the gold standard for what I look for in a satisfying romance.

WARNING: if the idea of cousins marrying disturbs you, skip this one. It’s not for you.

The main character, Rose Campbell, lives in Boston amidst a close-knit extended family of aunts and uncles, great-aunts, and cousins. Good-natured and good-looking, and in possession of a fortune inherited from her late parents, she is naturally surrounded by suitors, but some of her aunts and uncles would like her to marry one of her cousins to keep her money in the family. Her cousin Charlie is happy to oblige, and for a while it seems as if he has the upper hand over his rivals. He is, after all, the cousin generally considered to be the most promising—the one the other boys, only partly in jest, call Prince Charlie. But this Prince Charming has little going for him other than charm, and Rose soon realises that although she likes him, she doesn’t respect him.

When trouble comes, as of course it does, Rose turns for help to a cousin with more substance and strength of character, and it is this relationship, based on childhood friendship, trust, and mutual respect, that grows and deepens over the course of the book, and in the end, catches fire. Best of all, this model of integrity and quiet optimism is a bookworm. A bona fide, certifiable nerd.

Alcott goes a bit overboard towards the end, turning her Ugly Duckling character into a swan, I suppose to prove that he’s worthy of Rose. I never thought he needed the polishing. (What can I say? I married a nerd. I’m one myself. Some other readers have cried over the more elegant Charlie, but he didn’t interest me.)

Rose in Bloom is the sequel to the novel Eight Cousins, but it isn’t necessary to have read that one first. Eight Cousins is the story of Rose’s early teen years, after she was newly orphaned. She had spent most of her young life in the restrictive world of upper-class girls’ boarding schools, and wasn’t prepared for her introduction to her seven boisterous male cousins and their more active life style. Uncle Alec, her new guardian, is a forward-thinking physician who encourages her to exercise and think for herself, and she blossoms under his care. Eight Cousins is an episodic story about a girl dealing with universal challenges girls still deal with: peer pressure, healthy self-esteem, etc. It’s a decent story on its own, it just doesn’t stir the same emotional response in me that Rose in Bloom does.

I love the feminist slant of Alcott’s work, but like many of her stories for young readers, both Eight Cousins and Rose in Bloom suffer from occasionally being syrupy sweet and preachy. Taken individually, most of the points she makes have good sense to them—Why spend money on clothes in the latest fashion if the style doesn’t look good on  you?—but taken together they can add up to an uncomfortable dose of Puritanism. You know, that haunting fear that someone, somewhere, may be having fun. (By the way, even though upright characters and good moral examples were apparently what parents in the 1870s expected of books for their children, those expectations annoyed Alcott herself. She called her own books “moral pap for the young”, and preferred her “blood and thunder” pulp fiction. I’m going to have to read one of those someday to satisfy my curiosity about what she really found entertaining.)

As a teen, I devoured Alcott’s books, despite their flaws, and as an adult I still find them appealing.

Audience: teen girls, primarily, but fun for us older folk too. When I read it to my daughter some years ago my husband, rather surprisingly, got caught up in the romance as much as she did.

This entry was posted in Chick Lit, Children's Fiction. Bookmark the permalink.

2 Responses to Rose in Bloom