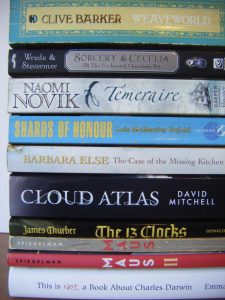 The Icelandic custom of exchanging books on Christmas Eve, and spending the rest of the evening reading and eating chocolate, sounds to me like a great tradition. My family knows they’ll be getting books from me—I generally do at least half my holiday shopping in the bookstore—and books are always on my wish lists.

If you’re looking for gift ideas, here are the books—some old, some new—that I read or reviewed this year that most excited me, either because they made me think, or they were just plain fun. (Of course, if you’d rather read them yourself than give them away, that’s OK too!)