Sorcery and Cecelia, or The Enchanted Chocolate Pot 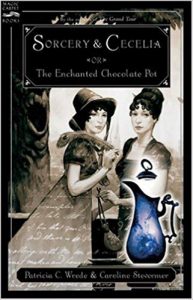 What do you get when two writers play the Letter Game, in which they take turns telling the story by writing letters to each other in character, with the only rule being that they must never reveal their ideas about the plot to each other? When Patricia C Wrede and Caroline Stevermer played, the result was Sorcery and Cecelia, or The Enchanted Chocolate Pot. Part Regency Romance (it’s set in 1817), part fantasy with a dash of intrigue, this is a romp through an alternate England alive with magic.

The story opens with Cecelia Rushton (Wrede’s character) writing from her country home in Essex to her cousin Kate in London with the news that a neighbour, Sir Hilary Bedrick, has been appointed to the Royal College of Wizards. There’s also mention of another neighbour, the Mysterious Marquis of Schofield. Within a few exchanges, Kate in London (Stevemer’s character) is writing about her adventure during Sir Hilary’s investiture ceremony, where a mixup leads to her nearly being poisoned. The chocolate pot—a very valuable chocolate pot, stolen from the Marquis—makes its first appearance, and she becomes acquainted with the Marquis, the poisoner’s intended victim.

Things soon get delightfully complicated, with Kate agreeing to a sham betrothal to the odious Marquis. (You can see where this is going, can’t you? And if the Marquis’s reasons for the betrothal don’t make a lot of sense, well, I did say it got complicated.) Back in Essex, Cecelia is working at cross purposes with James Tarleton, a friend of the Marquis, who is convinced that the loss of the chocolate pot is his fault, and that Sir Hilary has it and is up to no good.

As Kate and Cecelia get drawn deeper into the schemes swirling around the Marquis and the chocolate pot, they find themselves in serious danger. But neither one is the helpless passive female their older relatives keep trying to force them to be, for which the Marquis and Mr Tarleton should both be suitably grateful.

(This is not, by the way, anywhere close to an accurate representation of an upper-class woman’s life in the real 1817 England. The antics of these two irrepressible young women would have scandalised society and caused them and their families to be ostracised. Having a talent for magic would have changed the dynamics between the sexes, certainly, but the resultant society would either have (a) been unrecognisable as Regency England, or (b) imposed such severe restrictions on women’s use of magic that no man would ever have considered teaching Cecelia anything about it. Oh, well, this is fantasy…)

Given the nature of the game these two writers were playing, the fact that the plot makes as much sense as it does is rather remarkable. It’s a triumph for the seat-of-the-pants school of plot development. (That is, working out the plot as the story develops, rather than planning it out before starting to write.) The writers did, of course, clean things up a bit, dropping some loose threads and tying up others, before publishing the final version, but there are still some plot holes. Not everything works, but the pleasure they had playing this game comes through. I had more sheer fun reading this lighthearted tale than in just about everything else I’ve picked up recently.

Audience: teens and up. Nothing offensive that I noticed.