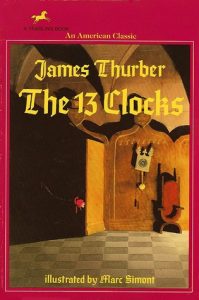 I have tales to make a hangman weep, and tales to bring a tear of sorrow to a monster’s eye.
I have tales that would disturb a dragon’s sleep, and even make the Todal sigh.

I don’t remember exactly when I discovered The 13 Clocks, by James Thurber, but I believe it must have been while I was in elementary school. I loved it. Even now, decades later, it still charms me. Not so much for the story, which is rather forgettable, but for the wordplay, which fired my imagination.

Thurber adores alliteration, makes up words with abandon like a darker Seuss, and scatters internal rhymes in random sentences. There are no lines breaks to prime you for rhyme, you have to be on your toes to catch it as it goes. Cadence is important, too; this book begs to be read aloud.

As far as the plot goes, it’s a simple, straightforward fairytale. The villain is the evil Duke of Coffin Castle: His nights were spent in evil dreams, and his days were given to wicked schemes. When a prince appears, the duke assigns him an impossible task to prevent him from marrying the duke’s niece. There are classic fairytale elements: a prince dressed in rags, curses and spells, chests of jewels, and love at first sight between the prince and a passive princess. (So the story’s not perfect. Oh, well, it was written in 1950.) There are more unusual elements, too, primarily the clocks frozen at ten minutes to five. In the duke’s castle, it is always Then, never Now, after he murdered time. His sleeves are still stained with the blood from his crime.

And then there’s the Golux, the fairy godmother stand-in, who is on the side of Good, by accident and happenstance. He forgets things, and makes things up, and may or may not be able to help the prince out of his predicament.

There is, by the way, some violence in this story, with the duke feeding his enemies to the geese, and threatening to slit the prince from his guggle to his zatch. That’s not uncommon in fairytales. Any child who can handle, say, Little Red Riding Hood or Hansel and Gretel (remember the oven?) should be able to handle this charming little tale.

The illustrations by Marc Simont are pretty cool, too.

Audience: lovers of fairytales and wordplay of any age.