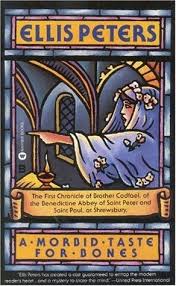 Between 1977 and 1994, Ellis Peters wrote 21 novels featuring the Welsh man-at-arms turned herbalist and Benedictine monk, Brother Cadfael. Set in the 12th century, the action takes place in and around Shrewsbury near the English-Welsh border. When we first meet him, Cadfael, in his late fifties, is a man with a substantial backstory. In a fit of religious fervour as a young man, he traveled to Palestine and, during some twenty years there as soldier and sailor, acquired a store of knowledge about the healing arts. He also observed violent death in many forms, experiences that served him well when later called on, or impelled by his own conscience, to act as detective. At the age of forty, he returned to Britain where he laid down his arms and entered a monastery, dedicating the remainder of his life to healing instead of fighting.

A series about a monk edges into cozy mystery territory, and could turn claustrophobic, but Cadfael is no recluse, standing apart from worldly concerns. His talents as a healer regularly bring him in contact with townsfolk and travellers, the sheriff counts him as a friend and confidant, and his experience makes him valuable to the abbot, who sends him out of the abbey to handle abbey business. The time period, during a civil war over succession to the English throne, ensures plenty of turmoil, and throws all manner of travellers—soldiers, messengers, refugees, diplomats—his way. There are a few repeating characters, but not many, although one, the sheriff (Mouse over for spoiler) is one of my favourite fictional characters. There is more than a little of him in Warlock Quicksilver, a character in my Reforging series.

The books are formulaic, but it’s a formula I enjoy. There is nearly always some romance, with one or more pairs of young lovers overcoming dangerous obstacles keeping them apart. The women are competent and intelligent, mostly; the men are honourable, mostly. Cadfael exposes the wrongdoer, and justice prevails—poetic justice, at least, if not always the king’s justice.

A TV series based on the books, and available on DVD, starred Derek Jacobi, the British actor who was more famous for I, Claudius. I can’t say I liked it very much. Jacobi just didn’t fit my mental image of the barrel-chested, sailor-gaited Cadfael. I didn’t like how they combined several characters into the character of the sheriff, either, and lost what I liked most about him.

The books can be read out of order, but I would recommend starting with the first two, if you don’t like spoilers. The first book, A Morbid Taste for Bones, while fine, is not one of my favourites; the second book (One Corpse Too Many) is.

Audience: Adults and teens. The books are, after all, about murders and other crimes, but most of the violence happens offstage, and there’s no explicit sex or offensive language. IIRC, only one (The Virgin in the Ice) dealt with sexual assault.