I was not thrilled when I realised that this year’s Banned Books Week (September 27 – October 3) was coming up. I have been making annual forays into the arena of banned or challenged books since I started this blog, but I couldn’t get up much enthusiasm for it this year. I’ve been paying way too much attention to the news coming out of the United States lately, and it’s depressing as hell. In my free time I want to read something cheerful and optimistic, and I didn’t expect to find that in the American Library Association’s list of most challenged books. Oh sure, there are some charmers there, like George, and Drama, but the subject matter of many books that have been challenged—Black Lives Matter in Angie Thomas’s The Hate U Give, violent revolution in Marjane Satrapi’s Persepolis, difficult family relationships in Alison Bechdel’s Fun Home, etc.—does not tend to lead to cheerful and optimistic.

And then I found this: 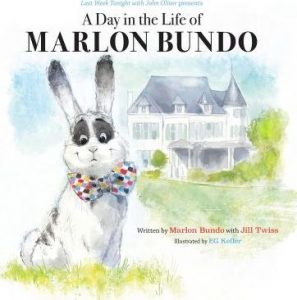 This story made me laugh. And, by God, I needed that laugh.

Laughter is not something I usually associate with either Banned Books Week or politics, but this children’s picture book is a delightful surprise.

Before describing the book itself, let me give a little background. There is a real rabbit named Marlon Bundo, who lives with Mike Pence (yes, that Mike Pence) and his family at the Vice Presidential residence on the grounds of the U.S. Naval Observatory. In 2018, Pence’s daughter wrote Marlon Bundo’s A Day in the Life of the Vice President, an educational children’s book explaining the Vice President’s job, with the proceeds going to a couple of innocuous-sounding charities: Tracy’s Kids and the A21 Compaign.

I’m not a fan of Mike Pence. I probably never would have heard of these books or Marlon Bundo if the staff at Last Week Tonight with John Oliver hadn’t been inspired to write the parody, A Day in the Life of Marlon Bundo, with text by Jill Twiss and illustrations by E. G. Keller. The proceeds from this also go to charity, but LGBTQ+ supportive ones: The Trevor Project and AIDS United.

Unusually for a parody, this one stands quite well on its own. A knowledgeable adult will have no trouble spotting the gentle pokes it takes at Mike Pence, but someone who doesn’t know or care about politics (like, say, a beginning reader) can enjoy the story, too.

On this special day, Marlon Bundo, a.k.a. BOTUS: Bunny Of The United States, finds love—love for another boy bunny who keeps his heart hopping. When they announce they are getting married, their friends say “Hooray!” because that is what friends do.

But not everyone says “Hooray!” The Stink Bug In Charge (although no one is quite sure how he got to be In Charge) says that’s not allowed. Boy bunnies can only marry girl bunnies. Boy bunnies marrying each other is different, and Different Is Bad.

The other animals stand up for the two bunnies, volunteering how each one of them is also different. (Although as differences go, some of them are not so divergent. I share a trait with Dill Prickles the hedgehog, who reads the end of his books before the beginning, to make sure they are not too sad for him.) When the stink bug continues to be stinky about it, they hold an election, and vote him out.

And so, in one slim picture book, we have several powerful messages: about democracy in action, about tolerance, and about love. The two bunnies get married because they enjoy each other’s company enough to want to spend the rest of their lives together, and that’s a healthy view of love for any age.

Although the political slant also plays a part, the LGBTQ+ theme is, of course, why this book has been challenged. It and seven other LGBTQ+-themed books make up the majority of this year’s ALA list of the top ten most challenged—a trend that would seem really sad if it weren’t so dangerous. When A Day in the Life of Marlon Bundo came out, the company publishing the Pences’ book got a little huffy, but Marlon took it in stride, saying,

Not gonna lie, I do look pretty fly in a bow tie. The only thing better than one bunny book for charity is…TWO bunny books for charity.

Hard to argue with that.

On a completely different subject, I recently did an interview with Nikky Lee, another New Zealand writer. Check out the result on her blog.

This entry was posted in A Writer's Life, Children's Fiction. Bookmark the permalink.