Sorcerer to the Crown

Posted on 9 October 2020 by Barbara Howe 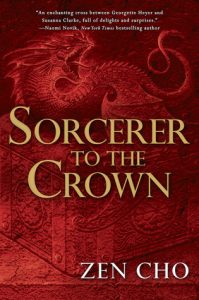 England’s magic is dwindling. It is a matter of great concern to the members of the Royal Society of Unnatural Philosophers, and contributes to the finger pointing, rumour mongering, and agitation in the ranks that is complicating the work of the one man who has a chance of actually doing something about it: the new Sorcerer Royal, Zacharias Wythe.

The diminishing magic is not the only cause of the general unhappiness. Despite being raised by the late Sir Stephen Wythe and his wife as if he was their own son, Zacharias is indisputably a Black man, born into slavery and freed by Sir Stephen. Nor does Zacharias have a familiar, a fact that is perhaps even more shocking. The Presiding Committee of the Society has accepted Zacharias as Sorcerer Royal—they had little choice after the Fairy King vouched for his qualifications—but even they do not know what happened on the night the previous Sorcerer Royal, Sir Stephen, died, or what became of his familiar. There is gossip that things are not as they should be, and of course they aren’t, but not in any way the gossips could have imagined.

Adding to Zacharias’s woes, the British government is pressuring him to use his magic in the war against Napoleon, despite a long-standing agreement with the French sorcieres to remain disengaged; no sorcerer on either side wants the Mutually Assured Destruction that would follow their participation.

Zacharias didn’t even want to be Sorcerer Royal. His passion is for scholarship, not politics. He already has far too much on his mind when he acquires an apprentice, the troublesome, independent, and highly unconventional Miss Prunella Gentleman.

The first few chapters of Zen Cho’s Sorcerer to the Crown are engaging but not overly exciting, especially as it takes a while to become comfortable with the author’s writing style. My interest in the story intensified considerably when the biracial Prunella is introduced. Self-taught and original, her organic magic is a match for Zacharias’s carefully studied and controlled spellcraft. And that’s even before her actions upend the stuffy and very privileged white male world of English magic.

Prunella is a treat: active, intelligent, competent, ruthless, and not in the least intimidated by pompous bullies. Zacharias is equally appealing: polite, principled, and courageous. They are the sort of characters you might find in one of Georgette Heyer’s novels (ignoring Heyer’s racism). Heyer’s Regency romances are an obvious influence, as is Susanna Clarke’s Jonathan Strange and Mr Norell, although Sorcerer to the Crown moves along at a much faster pace than that doorstop, lovely as it is. (Comparisons between the two are inevitable, with some reviewers expressing disdain for one or the other. Me, I like them both, for different reasons, and see no need to judge either one “better.” They just suit different moods.) I also see some parallels to Naomi Novik’s Uprooted, with its friction between the rule-bound male magician and the intuitive female, although I am grateful that this story has a more believable romance.

The plot is a bit convoluted, involving someone blocking the flow of magic to put diplomatic pressure on the British, without anyone actually informing the British why the blockage is in place. (Nice touch there about diplomatic miscommunications.) Some of the machinations and plot twists were so far-fetched as to have me rolling my eyes, but that didn’t stop me from getting engrossed in it. The book touches on some tough subjects—racism, sexism, colonialism among them—but the tone is breezy and light-hearted. I thoroughly enjoyed this clean, funny romp.