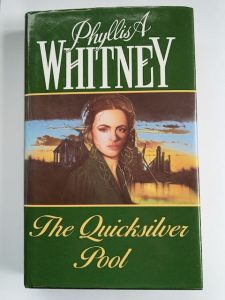 This was a pleasant surprise.

The blurb on my copy of The Quicksilver Pool by Phyllis Whitney paints it as a somewhat cliché gothic novel. When I paid a couple of dollars for this vintage (1955) novel at a used book sale, I wasn’t expecting much, perhaps a knock-off of Daphne Du Maurier’s Rebecca. (There are several points of connection, including a character in The Quicksilver Pool named Rebecca.) The ingredients indicating horrors ahead for the main character, Lora, are certainly there: a marriage of convenience between two near strangers (Lora and Wade Tyler); a gloomy, stifling family mansion; the mother-in-law from hell; a stepson described as “strange”; a trouble-making Other Woman; a husband still deep in mourning for his first wife; suspicious circumstances around the first wife’s drowning. But The Quicksilver Pool doesn’t follow the gothic novel conventions, and goes off in surprising directions.

But if it isn’t a gothic novel, what is it?

A solid historical novel: The story takes place in the middle of the American Civil War (December 1862 to July 1863), and captures the some of the ambivalence—or often, outright hostility—many Northerners exhibited towards the Union cause. It is set on Staten Island (before it became part of New York City) against the backdrop of resistance to the imposition of the draft, culminating in the (real) New York City draft riots and a (fictional) confrontation with a mob looking for a Black scapegoat.

Lora jumps in without hesitation—sometimes rashly—in defence of the powerless: her neglected stepson; the neighbour’s mistreated Black servant; even Wade who, in his thirties, is still tyrannised by his mother. Her actions naturally lead to some fireworks, but equally important, she has a grounding in pragmatic good sense, and learns to defuse a tense situation with a smile and soft words, without giving ground on what she believes is important. As she feels her way into the centre of the household, old misunderstandings are resolved, tensions loosen, and the gloom lifts. And Wade develops more of a spine.

A romance: This is the weakest part of the story. Lora is an appealing character, but Wade is much less so. (But then I can’t imagine my dear husband ever daring or even wanting to tell me I’m better off being ignorant of the news or what he does with his time. I’m very glad I don’t live in an era when women were expected to be uninformed.) The last fifty pages (out of three hundred) falls back on that old, tired trope of romantic difficulties arising simply because the two people involved don’t tell each other what they want. Sigh.

Aside from my quibble about the romance, this was a lovely story, and better than I expected. I’m glad I took a chance on it.