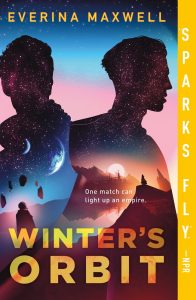 Irresponsible Prince Kiem isn’t ready to be married. But his cousin, Prince Taam, died in a crash, tearing a hole in the carefully arranged structure of alliance marriages binding the seven-planet Iskat Empire together. Someone has to salvage the situation by marrying Taam’s widowed partner, Count Jainan. (Yes, the relationships are male/male.) When the emperor orders him to, Kiem finds himself signing a marriage contract with someone he’d met only hours earlier. Irresponsible he may be, and in a state of shock, but he’s enough of a gentleman to give the still-grieving Jainan time and space to recover.

Romances where the plot hinges on simple communications failures usually make me toss the book unfinished in the giveaway box by the back door. Why can’t these people just talk to each other? (No one is a mind reader. If you don’t get what you want because you never took the time and trouble to articulate what that is, that’s on you, not on them.) But in Winter’s Orbit, Everina Maxwell’s debut novel, the communications failures actually make sense for once. Over the course of Jainan’s toxic five-year marriage to the sadistic, domineering Taam, he had been trained to never rock the boat, to be self-effacing, to never say what he wanted or do anything to trigger Taam’s contempt or volatile temper. Kiem, unaware of the abuse Jainan suffered, is determined not to pry into his relationship with Taam.

As the plot unfolds, of course, they have to learn to communicate. The stoic Jainan has to learn to trust the effervescent Kiem, and Kiem has to uncover depths of diplomatic skills no one (including himself) believed he had, because there’s a good deal more at stake than one relationship. Prince Taam’s death was not an accident. Jainan is accused of the murder. Someone attempts to kill Kiem. Jainan and Kiem grapple with the military and the emperor’s Internal Security, two forces at odds with each other. Meanwhile, the clock is ticking down on negotiations for renewal of the treaty that gives the Iskat Empire access to the larger galaxy, and that provides protections against encroachment by far larger and hungrier expansionist empires. If they can’t uncover who is behind the deadly events, and why, everything around them is in jeopardy.

There’s quite a bit going on in this space opera/murder mystery/romance: blackmail, piracy, military hubris, stolen alien artifacts, etc. Apparently it started out as a web serial romance on AO3 (archiveofourown.org), but was reworked to give more emphasis to the mystery and space opera aspects of the plot when picked up by Orbit books. The balancing act isn’t entirely successful and it gets off to a slow start, but it’s still a fairly light-weight, enjoyable read whether you’re more interested in nicely-plotted mystery with a side of romance (as I am) or a heart-warming romance with a side of space opera and mystery.

This entry was posted in Contemporary Romance, LGBTQIA+, Space Opera. Bookmark the permalink.