The Silence of Medair

Posted on 6 January 2019 by Barbara Howe 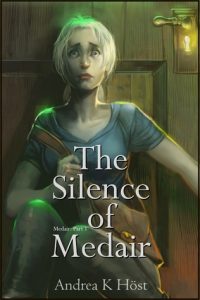 I cried over Andrea K Höst’s noblebright fantasy novel, The Silence of Medair. That’s a compliment, you understand. To become so engrossed in a story that the real world gets put on hold for a few hours, to identify so strongly with a character that I can feel how much it costs her to keep her chin up and her voice steady when she would rather throw herself onto her bed and sob—that’s the magic that keeps me coming back for more.

Medair an Rynstar, herald for the Palladian Empire, is on the losing side. With her country on the verge of disaster before the invading Ibisians, she goes on a quest to find a legendary horn that, when blown, will repel the invaders.

We’ve heard this story a million times, right? Well, no, not quite.

Medair does find the horn, and makes the fatal mistake of resting in the enchanted vault. When she wakes five hundred years later, the war is long over, and her side lost. A legitimate and respected ruler, heir to the combined bloodlines of both Palladian and Ibisian royal families, sits on the Palladian Silver Throne. The natives and invaders have interbred for so long that sounding the horn would rip the country into shreds.

That’s all backstory. The Silence of Medair begins with Medair hiding in the mountains, overcome with hatred of the Ibisians and shame for having returned too late.

War is again on the horizon. A king of a neighbouring country, Decia, is sponsoring another claimant to the Palladian Throne, and wants to use Medair and her treasures to finish what she set out to do so long ago: drive out the Ibisians. Medair wants nothing to do with this conflict, but in trying to evade capture, she runs into a high-ranking Ibisian mage in trouble after the failure of the mission he was on. Unaware of who she is, he enspells her to assist him in returning to the Palladian capital—a place she empathically does not want to go to. Confronting the changes wrought to her former home by invaders and five hundred years comes at a high emotional cost to her.

As the two countries draw closer to war, she is forced to take sides, but do the Ibisians living in Palladium today deserve her hatred? Are the Decians liberators or just another round of invaders? Whichever side she chooses, innocent people will die, and many survivors will hate her for her choice.

Medair is an appealing character: intelligent, honourable, fair, observant, wry, and capable. Not herself a strong mage, she has an awesome back of tricks, and is more often rescuer than in need of rescue. She spends a fair portion of the book angst-ridden over her choices, both past and future, but she actively makes choices. Even when she is furious over being compelled to aid the Ibisians, she chooses how she will respond.

Besides the character study, the story addresses issues of colonialism and the impacts of nurturing centuries-old grievances. There is also just a hint of romance.

The book does have a few defects: lamentable cover art, an out-of-character suicide attempt, a slew of confusing Ibisian titles, and, most serious, a magic system apparently without rules, where anything can happen. Towards the end, a world-changing magical event occurs with unforeshadowed results. The purpose seems to have been to leave the powerful Ibisians feeling as disoriented and ineffectual as Medair, but it jarred me, too. Not enough, however, to keep me from enjoying this fast-paced, engaging story.

As you can tell by now, I really like The Silence of Medair. The bad news is that it’s the first book in a duology, and the second book, Voice of the Lost, doesn’t live up to the standard set by the first. The first book ends with a semi-resolution, answering the biggest question facing Medair, and I probably should have left it there. Where the first book had just a hint of mutual attraction, the second book turns into a soppy romance novel. Her love interest didn’t appeal to me in the slightest, and the end had way too much of a squick factor for my comfort. Worse, the author robs Medair of her agency. In The Silence of Medair, she acts. In The Voice of the Lost, she turns her bag of tricks over to her lover, and that’s pretty much the end of her as a driver of the action. So, boo.

Audience: Adults down to mid-teens. Some violence, but no bad language. Off-screen sex in the second book.