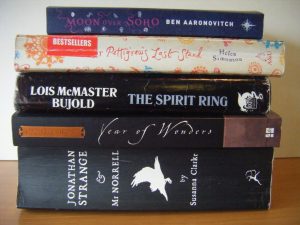 Out of the six dozen or so books I read (or started and abandoned) this year, here are the ones that were most successful in capturing my attention and drawing me into that state of willing suspension of disbelief long enough to enjoy the ride. That kept me entertained, in other words.

The list includes a couple I haven’t gotten around to writing reviews for yet, and only a few were published recently. (I make no claims to being up-to-date.)