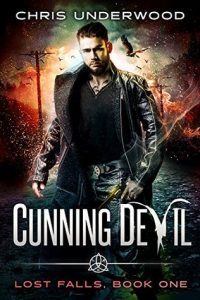 Ozzy Turner is a man you don’t want to cross. He is a cunning man, aka white witch; a magic user specialising in breaking curses and finding lost items or people. A man dedicated to protecting his community, the town of Lost Falls. What’s the difference between the white magic he uses and black magic? Nothing. The only distinction is in what the magic is used for, and the line between is thin. Ozzy is human enough to sometimes step over that line, especially when given a good, hard shove.

In Chris Underwood’s debut novel, Cunning Devil, Ozzy takes on a charity case, going in search of a stolen family heirloom—an antique silver child’s rattle—after the death of a man’s son. But nothing in this case is what it seems, and instead of thanking him for finding the rattle, the man turns on him. Shot and left for dead, Ozzy makes a devil’s bargain to buy enough life to get revenge. His quest leads him deeper into trouble—literally, in an underground goblins’ lair—as the battle he is caught up in wreaks destruction on Lost Falls.

The story is a fast-paced thriller, focusing on some other preternatural creatures rather than the ubiquitous werewolves and vampires. There’s violence and gore but no sex, and the understated almost-romance has a certain squick factor to it. Other reviewers have compared the book to the Harry Dresden series, but I thought it closer in spirit to the Mercedes Thompson series, which I prefer.

Ozzy is a promising, likeable character, capable of both deadly revenge and acts of great kindness and compassion, including to a creature that had just attacked him and gouged him with its claws. His uneasy alliance with a former enemy makes for amusing reading. The second book in the series, Pay Dirt, has just been released; it will be interesting to see where this series goes.

Audience: Adults and late teens. Gory violence but no sex.