Posted on 5 October 2018 by Barbara Howe 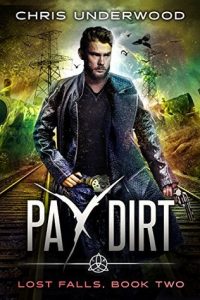 The ghoul claims he’s cursed. Ozzy Turner tells him he isn’t, and Ozzy ought to know. He makes a living breaking curses and finding lost items, and every test he knows has come up empty. He’s right; when the ghoul turns up dead—decapitated—the next day, it wasn’t a curse that killed him. The ghoul’s death comes hard on the heels of a message from an old friend asking for Ozzy’s help—a friend appearing to be involved in the same business, whatever it is, as the ghoul—and Ozzy dives in without second thoughts. He soon finds himself, once again, in serious trouble. With his mentor Early missing, his undead girlfriend Lillian going berserk, and a deadly wraith on a rampage through the town of Lost Falls, the odds are not looking good for Ozzy surviving another journey deep underground.

Pay Dirt, Chris Underwood’s second novel in the Lost Falls series featuring cunning man Ozzy Turner, is as good as the first, Cunning Devil. This urban fantasy, with a likeable protagonist and sympathetic portrayals of the town’s oddball preternatural residents, takes us on a fast-paced ride through their world. The fractured community of Strangers, held together by mutual fear of exposure, is under attack by a group of fanatical witch hunters intent on slaughtering them all.

I won’t give any more away, but the end, while resolving the immediate crisis, leaves enough plot threads dangling to spin out several more Lost Falls stories. I’m looking forward to them.

Audience: Adults and older teens. No sex, but plenty of gore, violence, and foul language.