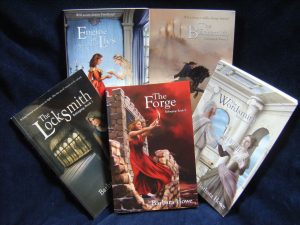 Reminder: the launch of The Forge, the fifth and final book in the Reforging series, will be held this weekend, on Sunday, 23 January, at 1:00pm New Zealand Daylight Time.

If you haven’t been following the series, here’s on overview:

In an alternate Europe, Charlemagne, the great Earth wizard and king of the Franks, turned north to conquer the British Isles instead of going south and east into Italy and Saxony. With Europe a roiling mess of conflict, he directed his wisest and most powerful witches and wizards to use their magic to protect the kingdom’s borders, enforce its laws, and encourage trade. Their response was the creation of four powerful magical entities named the offices, each working in a symbiotic relationship with the head of the corresponding elemental magic guild. The most powerful, the Fire Office, provided the country’s defences. The weakest, the Water Office, dispensed justice.

These four offices served the kingdom of Frankland well for hundreds of years, but a thousand years after their forging, the country is strangling in their iron grip. Frankland’s needs have changed, but the offices couldn’t adapt. In their haste to build the offices, the offices’ creators never considered that repairs might be needed.

The Reforging series follows a small group of Frankland’s most powerful witches and wizards, dedicated to rebuilding the four offices, and the challenges they encounter along the way: conspiracies and secrets, magical defences built into the offices that threaten to destroy anyone tampering with them, a rigid aristocracy that would rather indulge in civil war than lose any of their privileges, and a greedy neighbour planning to invade when Frankland’s Fire Office is out of commission for repairs.

The men and women involved in the Reforging effort are Frankland’s finest, but are even they enough to overcome mistakes calcified into stone a thousand years ago?

This entry was posted in A Writer's Life, Epic Fantasy, Noblebright Fantasy. Bookmark the permalink.