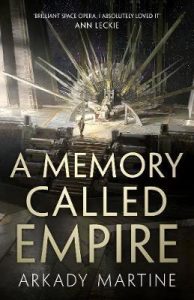 Lsel Station is a mining colony tucked into a Lagrange point near a metal-rich planet—a tiny, independent entity on the edge of the interstellar Teixcalaanli Empire. When a warship arrives at Lsel Station requesting—er, demanding—a new ambassador, without giving any hint what has become of the old ambassador, the Stationers, ever nervous about the intentions of their overwhelming neighbour, send Mahit Dzmere. Mahit is young, only twenty-six, but that shouldn’t matter. She is fluent in Teixcalaanli, has the qualifications and personality traits to be a good ambassador, and has her predecessor’s imago embedded at the base of her skull.

An imago machine is a sophisticated piece of electro-neural technology capturing and transmitting an individual’s memories. In the lean, fragile world of the Stationers, the hard-won knowledge passed on in the imagos is crucial to their survival. The loss of any imago line, particularly a twelve- or fourteen-generation line of pilots, is a blow to the entire society. But to the Teixcalaanli, if they can even conceive of such a thing, they view it as cheating. How dare you claim someone else’s experience and knowledge as your own?

Mahit’s imago, which she is not supposed to even admit she has, is out of date; it holds only five years of predecessor Yskander Aghavn’s time as ambassador. He had not returned to Lsel Station anytime in the last fifteen years to update it. Worse, her imago has been sabotaged. When Mahit arrives in the capital and discovers Yskandr was murdered, her imago fails, depriving her of his aid when she needs it the most.

With the Empire’s devouring attention turned towards Lsel Station, oblivious to the lurking alien menace threatening the Stationers from the other direction, Mahit, as Yskander’s successor, becomes a key player in a deadly game of interstellar politics. The Empire has its own problems, including an insurrection rising to pitched battles in the streets. Mahit is caught in the crossfire; her first week as ambassador is a traumatic one.

A Memory Called Empire, by Arkady Martine, is one of this year’s Hugo contenders. It starts off a bit slow, seeming to promise more of a comedy of manners or talk-heavy political intrigue than a thriller, but then the action heats up with a bombing that may or may not have been directed at Mahit. Her personality grew on me as I got further in, and as more attempts are made on her life, the story became gripping.

With the imago embedded in the ambassador’s brain, who is she? Mahit? Yskander? Some melding of the two? I’ve been fascinated by the idea of memory transference, and the questions of what those memories do to the recipient, ever since I read Dune decades ago. (To me, Paul Atriedes’ sister Alia, who appears in maybe three scenes, was more interesting than Paul, the main character.) I like how Martine handles those ideas in this novel, ringing the imagos’ use with taboos and psychological conditioning to prevent abuse. I don’t quite buy the conversations in her head, but they do enliven the story.

Questions of identity figure throughout. When she has to ask her new friends for help, they have to grapple with the question of how wide is their definition of we? Can their concept of themselves stretch wide enough to include a barbarian outsider?

Cultural imperialism is another theme. The older Stationers resent the grip the Teixcalaanli have on the imaginations of their young cohorts, but despite her fluency in their language and love of their culture, Mahit knows the Teixcalaanli will always view her as a barbarian. This knowledge hurts, even though she is proud of being a Stationer, and she resents both her inescapable otherness in Teixcalaan and the fact that it matters to her.

Mahit is a strong character, in multiple senses. She is intelligent, likeable, politically astute, and is an active participant in the ongoing crisis. She fumbles a bit at the beginning, but once she begins to find her footing, learning who she can and can’t trust, she acts adroitly and decisively. Even under the “protection”—in reality a pampered prisoner—of Nineteen Adze, one of the emperor’s closest advisors, Mahit never quite gives up her agency. She consistently confounds everyone who tries to take advantage of her. The Teixcalaanli she comes to depend on, primarily her liaison, Three Seagrass, and Twelve Azalea from the Information Ministry, are equally engaging and competent. There is no plot-driven stupidity here. Yay! (Although Mahit’s decision on how to pay for her clandestine neurosurgery was jarring, after the earlier emphasis on protecting Lsel Station’s intellectual property.) The other women are equally active, competent participants.

(And yes, the Teixcalaanli names are a bit weird. I kept mis-reading Three Seagrass as Three Snodgrass, which didn’t help. The names are at least more descriptive than in some other speculative fiction novels I’ve read recently. Nineteen Adze is described by the poetry-drenched Teixcalaanli as the woman whose gracious presence illuminates the room like the edgeshine of a knife. How’s that for a memorable epithet? Besides being entertaining, the names are at least pronounceable. Try reading The Goblin Emperor aloud. Argh!)

Although the stories are very different, the imperial backdrop kept reminding me of Ann Leckie’s Imperial Radch trilogy. Both empires have economies dependent on continual expansion, and neither is the least bothered by their overwhelming cultural dominance. If you are familiar with Leckie’s work, imagine this as the leadup to the first encounters with the alien Presger (the lurking aliens).

A Memory Called Empire is labelled as the first book in the Teixcalaan series. I am looking forward to the continuation of Mahit Dzmare’s story in the sequel, A Desolation Called Peace, due out in 2021.