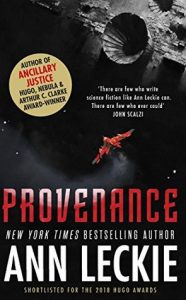 Ingray Aughskold is an insecure, needy kid. Well, not a kid, exactly. She’s in her twenties, with a good job on her home planet Hwae, but her politically powerful mother has encouraged competition between her foster children: Danach, the son of an ambitious but less well-connected family, and Ingray, a charity case with no biological family to fall back on if her foster mother rejects her. Ingray believes their mother favours Danach as her heir to carry on the family name and traditions, so she makes a wild gamble to win their mother’s approval: she frees a convicted thief from prison to help her recover the set of priceless vestiges (artefacts or mementos) he is reputed to have stolen. Her plans go awry right from the start, and she is caught up in a deepening morass of forgeries, false identifies, culture clashes, political manoeuvrings, and murder.

The conflicts and stakes start small in Provenance, by Anne Leckie. In the opening chapters, Ingray is afraid of personal embarrassment in her rivalry with Danach, but the story soon unfolds into a series of multi-level interconnected conflicts with increasingly higher stakes: rivalries among Hwae’s power families for local political control, rivalries among several human societies in neighbouring systems, with the Hwae’s identity and autonomy at risk, and interspecies frictions threatening the peace established by interstellar treaty among the Significant Species—human and the alien Geck, Rrrrr, and Presger.

Despite the scope of the problems involved, the focus stays on familial tensions. An inconsequential romance could have been dropped with no damage to the story. Except for the climactic hostage situation, the drama is really in Ingray’s relationship with Danach, and in several parent/child relationships—hers, the freed prisoner’s, and one involving the alien Geck.

The story also delves into questions of personal and national identity through the accumulation of storied objects (like the Liberty Bell) or founding documents (like the Declaration of Independence, the Treaty of Waitangi, or the Magna Carta). Do the objects themselves have intrinsic value, or is the value in the ideas they represent and memories they trigger? In this story, when some of those objects are determined to be forgeries, the repercussions are life-changing.

This is a stand-alone novel*, but if you are familiar with Leckie’s Imperial Radch trilogy, you will already have noticed that this is set in the same universe. It starts after the end of that trilogy (the Geck ambassador is on her way to the recently-called Conclave) but takes place in an independent human society outside of Radchaii space, with unrelated characters. Provenance is not as compelling a read as Ancillary Justice, and Ingray is not as interesting a character as Breq. If you understand and accept that, it’s still a fun read with interesting world-building and a complex plot.

Provenance does have a few problems. The biggest one is the inconsistencies in the point-of-view character, Ingray. She never quite jells as a real person. For someone who supposedly has been trained as a political operative from a young age, she seems incredibly naive at times. We’re told she can maintain a smile under the most trying circumstances, but she bursts into tears regularly. We’re also told she’s great at planning, but we’re never shown that. The situation she’s in at the beginning involves a serious lack of planning. She does prove resourceful in later situations, but they all look to me like she’s winging it. Which, I admit, I’m not good at. I am good at planning. I wouldn’t call what Ingray does, “planning.”

The book also gets off to a rather slow start. The first few chapters are mostly just conversations providing backstory, setup, and world-building. It doesn’t really take off until Ingray is home, interacting with Danach and getting whiplash from the freed prisoner’s lies, misdirections, and retractions.

The heavy use of gender-neutral pronouns also bothered me more than the exclusive use of she in Ancillary Justice did. They were mixed in freely with gender-specific pronouns; Ingray was she, Danach was he, and random other people were he, she, or e. I have no idea how someone in that society would know which one to use for a random individual, and that annoyed me a bit. (Does that make me a reactionary? I’m quite willing to use whatever pronoun an individual wants, but you can’t tell just by looking.)

*If you haven’t read the Imperial Radch trilogy, this is all you need to know: