The Case of the Missing Kitchen 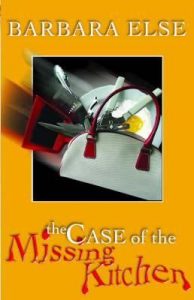 Suzie Emmett is having a bad week. It starts when she puts her hand through a window and needs stitches. It gets worse when her detective boyfriend takes her to a place she refuses to name, but that starts with ‘m’, to identify a woman who might be her sister Phillipa, but isn’t. On driving home—after the doctor told her not to drive—she discovers her house has been ransacked. Then to top it off, her two children disappear, and her ex-husband lies to her about where they are.

It gets more bizarre on Tuesday when she returns to her house—after her detective boyfriend ordered her to stay away—and discovers that her kitchen has had a makeover: all the cupboard doors and the countertop have been replaced. Why? And there’s another body resembling her missing sister in her pantry.

The rest of the week is an adrenalin-fuelled search for her missing children, racking up parking tickets she can’t pay off because she’s broke. With an ex-husband (father of her son), and ex-lover (father of her daughter), a soon to be ex-boyfriend, two sisters (one of them missing), and two brothers-in-law (one of whom may be having an affair with the sister who isn’t his wife) who all seem to know bits and pieces of some conspiracy that they’re not letting her in on, she doesn’t know who she can trust.

Set in the city of Wellington, The Case of the Missing Kitchen by New Zealand author Barbara Else is one of the most breathless reads I’ve ever encountered. Part murder mystery, part family drama, and part madcap farce, it starts at a run—the first chapter contains as much drama and action as some entire books—and the pace never lets up. Suzie’s narrative is close to stream-of-consciousness, with tangents going in all directions and weaving in bits of back story.

I read this aloud to my husband, and it seemed as if every other page triggered an outburst of “No, you fool, don’t do that,” but Suzie seems congenitally unable to do the sensible thing. Particularly after anyone tells her what to do. (I can’t really fault her for that. If I had sisters like hers, I’d have trust issues, too.) Multiple people tell her to stay put and stay calm. Does she? Of course not.

Suzie is an original, funny, endearing nutcase. Her fierce devotion to her children made me root for her; her creative use of a staple gun made me laugh out loud. The mystery, though well-plotted, is utterly ridiculous, but that’s part of the fun. Ignore the garish orange cover; it doesn’t do this book justice.

This entry was posted in Kiwi author, Mysteries. Bookmark the permalink.