Posted on 5 October 2019 by Barbara Howe 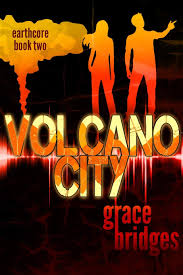 In Volcano City, book two in Grace Bridges’s YA Earthcore series, the crazed and villainous Mr B is back, and out for revenge on Anira and the superpower-endowed Earthcore team. Only now, instead of paving over and hiding natural wonders, he intends to prod a magma bubble into erupting and obliterating everyone in Auckland, New Zealand’s biggest city. He coerces a boy from Rotorua, also gifted with superpowers, into helping him. While running tests on equipment provided by a mind-controlled British scientist, they trigger a series of earthquakes of increasing intensity. Will Anira and her friends figure out what is happening in time to stop it?

The action in this story is in Auckland but the Earthcore team’s superpowers are tied to the mineral-laden waters of Rotorua, and this is a major stumbling block for them. Away from home, the boy with the phenomenal eyesight is nearly blind. Anira’s mind is clouded, and she can’t remember what happened in Rotorua. Drinking water carried from the hot springs revives them and restores Anira’s memory, but a trip to Rotorua to collect the water and the other members of the team costs precious time, and they can fit only a limited amount of water and people in one vehicle.

The taniwha, the guardian spirits, are also tied to Rotorua, but they can travel with their chosen Earthcore humans when necessary, and when the humans call on them for help, the results are rather unexpected.

The elements that made RotoVegas, the first Earthcore book, appealing are still here: the teamwork involving a wide range of ages and abilities, the blending of Maori myth and modern New Zealand culture, and the sense of place, this time in Auckland. We learn a bit more about the taniwha and what they are capable of. Unfortunately, we also have to put up with Mr B and his cartoonish evil schemes, but if you enjoyed the first book in the series you will like this one, too.

Audience: primarily teens, but a clean, light read for anyone.