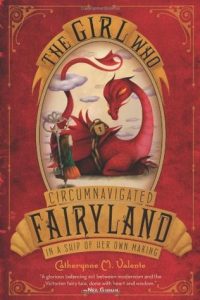 Most of the books I review on this blog are ones that I can endorse, ranging from lightweight, pleasant entertainment to hefty tomes worth the effort for the emotional or intellectual impact. That has been a deliberate choice; I’d rather advocate for books I approve of than stomp on ones I don’t. With all the choices out there, why waste my time and airspace drawing attention to books that don’t deserve it?

That’s why I’m approaching The Girl Who Circumnavigated Fairyland in a Ship of Her Own Making, by Catherynne M Valente, with some trepidation. It’s an award winner, a best seller, and it has garnered praise from such luminaries as Neil Gaiman and Tamora Pierce. Lots of readers love it, and I can understand why they do. But it has also drawn a number of articulate negative opinions, not just the usual ‘This is soooooo boring’, and I understand those, too.

It left me deeply ambivalent. There are some things about it I loved and some that really annoyed me.

First of all, there’s the question of the target audience. It is marketed as a book for the middle grades, but many of the narrator’s comments seem targeted towards adults rather than children, and the breadth of the vocabulary will challenge many adult readers. Is this a book for children or for adults who enjoy reading children’s books? I don’t have an answer for that.

By the way, this Fairyland has little to do with the fae of myth and legend.  This is a Fairyland cut from the whole cloth of the writer’s imagination, like Wonderland or Oz, and that’s fine with me.

WARNING: Spoilers ahead. If you don’t want them, bail now.

Here are some of the things I loved:

On the flip side, my biggest complaint is over the messages another character’s ejection sends. Maud Smythe, the previous queen, had found her own way into Fairyland rather than being brought there as September was. Because of that, she couldn’t stay, despite being a wise and just ruler, and was thrown back into the hands of an abusive father in the mundane world. September, on the other hand, with loving parents, was invited in. When she left Fairyland she was given assurances she would be able to return.

Seriously, what kind of a message is this? Life’s unfair, too bad? Or that girls who work at getting out of a bad situation get the shaft, while the ones who are more passive are rewarded? Neither of those is a message I want to pass on!

My daughter had a much stronger reaction to the scene with the shadow than I did. She was already annoyed because the story felt too much like travelogue to her; she couldn’t make out the plot and every new scene felt disjoint and unconnected to the preceding scenes. Then this scene upset her so much she refused to listen to me read any more it. She hardly ever does that.

If you love it, that’s great, but it wasn’t a good choice for me and my family.

Audience: Anyone with a high tolerance for whimsy and surrealism, and who doesn’t mind the things that bothered me.