This is Not a Book About Charles Darwin 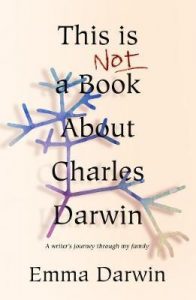 What is This is Not a Book About Charles Darwin about if it isn’t about Charles Darwin? The creative process, primarily, as the author, Emma Darwin, explores her failure to write a novel about the Darwin family, and the toll that failure takes on her, ultimately landing her in the hospital with a heart attack. Somewhat secondarily it also takes a look at the burdens and benefits of being a member of a large, prominent, and tightly-knit family.

Emma Darwin is an English novelist and teacher of creative writing. She also happens to be the great-great-granddaughter of Charles Darwin, along with 150 other great-great-grandchildren. This book—a blend of memoir, biography, and essay on the art of creative writing, plus excerpts from her fiction, including the failed work—has its roots in the Darwin Bicentennial (2009) when her agent began pushing her to take advantage of her name and connections, and write about the Darwin clan. She hadn’t wanted to capitalise on those connections, but since every review of her work included the connection to ‘The Ancestor’, it seemed a sensible thing to do. Why not?

Despite her own instincts which told her not to, over the next several years she explored her family’s histories, starting with Erasmus Darwin, the 18th-century natural philosopher and grandfather of Charles, and working her way down. She was looking for what she calls the white spaces, the gaps between the well-documented events in these famous people’s lives where a novelist could find room for invention. After much scrambling around in the family tree and some false starts, she made a serious attempt to write a story involving her grandparent’s generation (Charles Darwin’s grandchildren) spanning the two World Wars and the Spanish Civil War.

She describes the multiple iterations she made on the expanding story, and the reasoning behind each rewrite, as her agent tells her that each new version still isn’t working. She eventually had to admit that a serious lack of tension in her novel was due to the tensions she was living with as a writer: Her dread of showing off or offending her dozens of cousins. The constraints put on her imagination by the fact that the lives of the more notable members had already been thoroughly covered, often by multiple biographers, and by her own desire to stick to the essential core of the lives of these real people. And perhaps most important, her attempt to write what someone else wanted her to write rather than the stories she wanted to tell—stories that kept leading her away from the Darwins. How does one write a compelling story about people who generally led productive lives without a lot of drama?

She does eventually come to terms with failure, after recovering from her heart attack, and gives us this detailed example of one creative endeavour’s multiple metamorphoses. As another novelist who has ripped apart and rewritten one of my babies, I can sympathise, and appreciate the glimpse into someone else’s mind.

Personally, I’ll be looking forward to her next novel even if it has nothing to do with the Darwins. I didn’t read this book because I have a great interest in Charles Darwin. (I knew who he was, of course, but not much about his life outside of his contributions to science.) I read this book because I discovered Emma’s blog, This Itch of Writing, some time ago, and it was more helpful to me as a fledgling novelist than any other source of writing advice I have found.

Besides the story about her story, the tour of her family tree was fascinating, and I’m more interested now in digging further in, particularly regarding a few standouts: Gwen Raverat, artist and memoirist; Julia Wedgewood, novelist who appears to have fallen in love with Robert Browning after the death of his wife Elizabeth Barrett; and the composer Ralph Vaughan Williams. (The man who wrote the gorgeous hymn tune Sine Nomine—a.k.a For All the Saints—was an atheist? I had no idea. I hadn’t connected him with the Darwins, either.)

There were a few other minor gems in this work. In one place, she says:

Women’s first names are the linguistic equivalent of mitochondrial DNA: transmitted through the mother, as surnames may be transmitted, like other DNA, through the father.

Yes, my family has passed down women’s names, too. In another spot she describes pain “on a scale from one to childbirth”. (Yes! Love that!)

To sum up, as another writer, I found this book very interesting, but it isn’t only for other writers. There’s enough meat here about creative thinking in general that it’s worthy of a wider audience.

This entry was posted in On Writing. Bookmark the permalink.