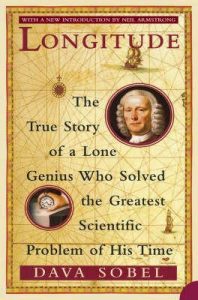 On a ship at sea, out of sight of land, how do you know where you are? These days it’s easy: check your GPS device and it will tell you, to within a few meters. But before the technological leaps of electronics and satellites, how would you have known?

Finding out where you are relative to the equator—your latitude, or distance north or south—is straightforward, just a matter of using the angle of the sun or prominent stars. Mariners have been sailing by the stars for millennia; sextants and applied math increased the accuracy without changing the basic model.

Figuring out where you are east or west—your longitude—is much harder. To start with, east or west relative to what? For calculating latitude, there’s no debate about where the equator is: it’s firmly established by the motion of the earth relative to the sun. There’s no such celestial marker for longitude. Any line used as a starting point is an arbitrary decision. And with no celestial markers, how do you know how far you are from that arbitrary starting point?

The key is to be able to tell time accurately. As Dava Sobel explains,

To learn one’s longitude at sea, one needs to know what time it is aboard ship and also the time at […] another place of known longitude—at that very same moment. The two clock times enable the navigator to convert the hour difference into a geographical separation. Since the Earth takes twenty-four hours to complete one full revolution of three hundred sixty degrees, one hour marks one twenty-fourth of a spin, or fifteen degrees. And so each hour’s time difference between the ship and the starting point marks a progress of fifteen degrees of longitude to the east or west.

Before the invention of accurate clocks, it was impossible to tell how the local time differed from the home port’s time. On the night of 22 October 1707, the admiral of an English fleet carrying more than two thousand men believed his ships were safely out at sea, clear of any coastal hazards. They ran aground on the Scilly Isles, southwest of Cornwall. There were only two survivors. Other similar maritime disasters happened with appalling frequency, especially with the expansion of global trade in the 16th and 17th centuries. In 1714, the British Parliament passed the Longitude Act, promising ￡20,000—an enormous sum in those days—to anyone who could solve the longitude problem.

Sobel’s book, Longitude: The True Story of a Lone Genius Who Solved the Greatest Scientific Problem of His Time, is a short (less than 200 pages) account of the longitude problem, the various attempts to tell time at sea, and the British clockmaker, John Harrison, who built the world’s first true precision timepiece. Harrison’s life and inventions take centre stage, but his work is described within the context of other competing efforts, ranging from ridiculous but entertaining crackpot ideas to abstruse but highly-regarded astronomical calculations. At the time, the cognoscenti expected an astronomically-based solution to win the prize. Harrison was not the first to imagine a clock-based solution—Sir Isaac Newton, for one, wrote about the idea—but most considered reliability at sea too difficult to achieve, given the problems of constant motion and fluctuating temperature, humidity, and barometric pressure.

Harrison began working on the problem sometime in the 1720s. After decades of work and several prototypes of increasing complexity, he made the technological leap resulting in a pocket watch that, in 1762, lost only five seconds on an eighty-one-day voyage.

Harrison’s work was undoubtedly innovative, but he was not an articulate man. Between his rivals’ political manoeuvring and his own inability to explain how his timepiece worked—and what good was it to the British government if it couldn’t be replicated so all the British navy and commercial navigators could use it?—he had to wait far longer than he should have for the recognition he was due. His sea-clocks are marvels. Nearly two and a half centuries later, they are still in working condition and on display in the Royal Observatory in Greenwich, England (or were, pre Covid-19).

Longitude, the book, is a lightweight read, part biography/history and part science writing. It is aimed at the general reader, no specialised knowledge needed. The subtitle may be a bit of an exaggeration, but the tale of the impacts of politics, personalities, snobbery, and greed on scientific advance and technological innovation is an intriguing one. The only complaint I had was that diagrams of the clocks’ internals would have helped in understanding them, but my copy is from when the book was first published (1995). Apparently there is a more recent illustrated version that fixes that lack, but there are also illustrations in Wikipedia, including animations in the article on escapements.

Audience: anyone interested in maritime history or the history of science and technology.