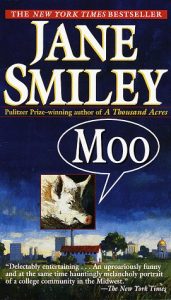 I first read Jane Smiley’s Moo years ago, but on randomly picking it off my shelf recently, found it still an enjoyable story. Moo is a humorous look at life in an agricultural university in the American Midwest, part soap opera, part satire. Covering the 1989-90 academic year, some details are a bit dated, but the personality clashes and political wrangling are surely still relevant. The characters will be recognisable to anyone who has ever had a brush with higher education. Recognisable enough, that when the book was published in 1995, readers at many different institutions claimed it was about their school.

This is a character-based, situation-driven novel, and the cast of characters is rather large, including faculty, students, staff, and some members of the surrounding community, with overlapping and intersecting threads. The characters are not all equally interesting, but among the more entertaining are:

That hog, Earl Butz (named after Richard Nixon’s Secretary of Agriculture whose policies pushed the United States towards large-scale corporate farming) is a major character in his own right. This is how Smiley describes him:

Earl’s business was eating, only eating, and forever eating… Earl Butz was a good worker, who applied himself to his assigned task with both will and enjoyment… At Christmas, Bob had purchased some large, sturdy red toys…They had been Earl Butz’ first toys, and he played with them when he could fit the time into his work schedule.

There is a list of the characters here. I wish I had had that the first time I read it; I sometimes found myself flipping backwards, thinking Helen, now which one was she, and who is she sleeping with?

The main plot, such as it is, is about funding. The governor threatens budget cuts; the administration scrambles to find additional funding from corporate sponsors. Belt tightening ripples through the system, triggering infighting and endangering some already precarious balancing acts. The novel also explores tensions within the university over what, exactly, it purports to be, as faculty yearning towards the more prestigious Ivy League schools threaten to drag the university away from its locally-relevant, vocational-education roots.

Moo is funny but warm, leaning more towards situational comedy and small tragedies than biting satire, although there is that, too. Don’t expect a riveting page-turner; approach it as a leisurely and Dickensian slice of life in academia. Some threads do follow bizarre, delusional, or abrasive characters, but most of them  are fairly ordinary, relatable people. Their stories are told with streaks of empathy and melancholy woven in.

Audience: anyone who has ever been through an institution of higher education.

This entry was posted in Modern literary fiction. Bookmark the permalink.