The Lord of Stariel 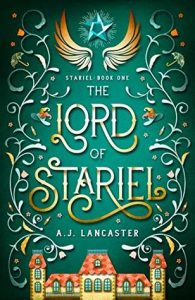 Twenty-something Hetta (Henrietta) Valstar, master illusionist, returns to the Stariel estate after six years of self-imposed exile. But it’s too late for this prodigal daughter to reconcile with her tradition-bound, disapproving father, the Lord of Stariel. She’s come home for his funeral and the choosing of the next lord. And here’s where it starts to get interesting: the new lord isn’t appointed by human rules. The land itself—Stariel estate, a living, willful, magical entity—chooses its lord, and the humans in the large, extended Valstar family have to accept its choice. They are, however, betting on one of two favourites: the late lord’s oldest son, Marius, and nephew, Jack, the Valstar everyone agrees is most qualified.

But something goes wrong at the Choosing ceremony, and the new lord is someone no one expected or wanted. Someone who doesn’t want the position. The new lord (Spoiler)
soon discovers that human disapproval and festering resentments are only part of Stariel’s problems. Bordering on both human and fae lands, and with its defences weakened, Stariel is beset by both overreaching human neighbours and vengeful fae. With Hetta, Jack, and Marius among the few family members aware that the new lord is a sham, they set out to uncover who sabotaged the Choosing ceremony and why, and to defend Stariel until a real lord can be chosen.

The Lord of Stariel, debut novel by New Zealand author A J Lancaster, combining fairy tale, mystery, family drama, and sweet romance, is a delightful story. Set in an alternate world similar to our own early 20th century, magically-powered cars and phones are just coming into widespread use, and the people of Stariel, far from the modern world of the country’s capital, disapprove of Hetta’s employment in the theatre with its loose morals. That is, they disapprove if they pay her any attention at all.

But Hetta is not someone they can ignore for long. Strong-willed and forthright, Hetta is an active agent, even in this man’s world, and quite capable of taking care of herself and others. I love stories with intelligent, competent, likeable female protagonists, and this is one. Plus, she has better taste in men than many romance novel heroines.

Hetta’s cousin, Jack, is also an intriguing character. He, like Hetta, works for Stariel’s best interests, struggling to overcome his resentment over being cheated of what he sees as his birthright. This shared sense of duty, in fact, is one of the things I like most about this story. It’s told with a light touch, but there are some serious underpinnings, notably family loyalty, teamwork, fair treatment, and reconciliation (or lack thereof).

There are, however, a few minor problems. The most serious is that the portrayal of Hetta’s brother, Marius, relies on some unfortunate stereotypes to telegraph why he’s not a serious contender for lordship. The big reveal about him was no surprise by the time it came. Sadly, neither were the other big reveals—I had the villain pegged early on. It also starts out a bit slow, although it picks up after the Choosing ceremony.

Aside from those problems, I loved it. I particularly like the ‘land-sense,’ the magical ties between the members of the Valstar family and the Stariel estate, and the glimpses we are given of the fae world. The Lord of Stariel is the first of four in a series. The second, The Prince of Secrets is already available, the third, The Court of Mortals, is due out soon. I’m looking forward to reading them.

Audience: Adults and teens. Contains nothing offensive that I noticed.