Posted on 2 November 2019 by Barbara Howe 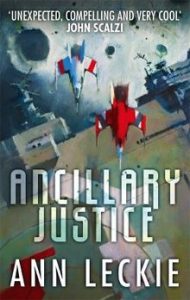 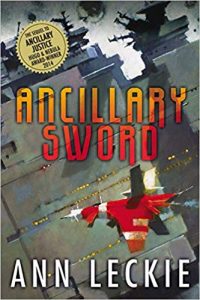 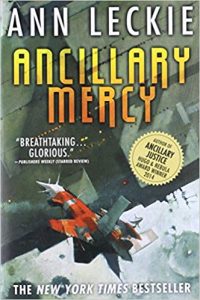 The Imperial Radch trilogy by Ann Leckie, consisting of the books Ancillary Justice, Ancillary Sword, and Ancillary Mercy, is one of the most astounding and engrossing works I’ve had the pleasure of reading in a long time. Given the number of awards these books have won—Hugo, Nebula, Locus, Arthur C Clarke, …—a lot of other readers felt the same way. There probably isn’t anything new I can say about them, but since this blog is mostly about books I’ve enjoyed, it’s still worth saying that I liked them, and why.

More space opera than hard sci-fi, this trilogy’s focus is on people and society rather than technological marvels, and like the best speculative fiction, shines a reflective light on our own time. The story starts out as an individual quest for justice but broadens into a wider slave rebellion, and by following a main character who is not human, extends our understanding of what a sentient being, worthy of respect and fair dealing, might be.

The Radch is a highly stratified, militaristic society, rather loosely based on the Roman Empire, that has minimised internal pressures and kept its economy growing by continual expansion, engaging in wars of conquest and annexing all the human worlds it comes in contact with. This strategy served it well for several thousand years, but contact with the non-human and highly destructive Presger has brought the expansion to a halt, and the Radch are struggling to come to terms with the new restrictions.

The Radch rely heavily on Artificial Intelligence, with their space stations and spaceships all controlled by sophisticated AI brains. Justice of Torren, the troop carrier at the centre of the story, is a sentient being but a slave to the Lord of the Radch and to her human officers. The fact that she loves her captain doesn’t mean she isn’t a slave. As a troop carrier, her holds contain thousands of bodies in suspended animation—bodies of captives from earlier annexations. When needed, they will be awakened, their minds wiped of all memories of their past lives, and equipped with implants that make them ancillaries: extensions of the ship’s AI. Peripheral Input/Output devices, in effect, feeding data to and performing tasks for the ship. Easily replaceable, and in sync with the ship and each other, ancillaries make perfect soldiers.

Breq, the narrator, was once an ancillary, but is now the sole survivor of the destruction of Justice of Torren twenty years earlier. Loaded with the ship’s memories and without a captain, she is a free agent out for revenge on Anaander Mianaai, the Lord of the Radch. While Breq is something that was not originally  human, but is now housed in a human body, the Lord of the Radch was once human, but may no longer be so. Her consciousness extended across thousands of cloned bodies connected by communications implants, Anaander Mianaai has a grip on power any earth-bound absolute rule would envy. She is everywhere and, with each of her individual bodies expendable, effectively immortal. She does, however, have a weakness. Her individual minds are no longer quite in sync—in computer science terms, a ‘split-brain’ problem. In fact, the crux of the plot is that she’s at war with herself over the future of the Radch. Spoiler.

The story is told in alternating chapters, with one thread following Breq as she obtains a deadly Presger weapon and then closes in on her quarry. The other thread follows the events, twenty years past, leading up to the ship’s destruction. In those chapters, the narration is first-person semi-omniscient, with point of view slipping from one ancillary to another, sometimes with disconcerting effect.

This is not initially an easy read. Not one I would recommend, anyway, to someone who is comfortable only with straightforward, linear narratives. The world-building is also complex, giving the reader a lot to absorb to make sense of the Radch universe. As an introduction to the science-fiction genre, this would scare a newbie away, but for an experienced reader this can be satisfying, at least partly because it does make you work at it a bit.

I also need to mention the pronouns. (Every review of this trilogy does, sooner or later.) Radch society does not distinguish by gender. Everyone, regardless of their biological equipment, is referred to by ‘she’ and ‘her’. In a couple of cases, from contact with a society that does pay attention to gender, we know that the ‘she’ referred to is in fact male. For others, we might be given a few clues, but we never know for sure.

Some reviewers don’t like this, calling it a gimmick, but I see it as serving a useful purpose in emphasising that gender really didn’t matter to this tale. Given a story about a militaristic society and the exclusive use of male pronouns, readers would visualise only men, and some of us would be annoyed or affronted that there are no women in it. In the obvious alternative, with clearly defined male and female characters, we fall back on our usual assumptions about gender roles. But here, with everyone being referred to as ‘she’, even when we know they’re not, we have to question our assumptions about every character. Does that make us visualise them as androgynous, or as a mixed bag? My husband kept looking for clues, guessing at the gender of each new character. I stopped that fairly quickly and imagined them as more or less androgynous, because in this gender-neutral society, the question was irrelevant to the plot.

(If someone argues that this is an artificial exercise and that grouping men under female pronouns makes them invisible, isn’t that what feminists have argued for decades about the use of ‘he’, ‘him’, ‘man’, etc. obliterating 51% of humanity? If Leckie’s use of female pronouns for all characters makes you uncomfortable, well, maybe that’s not a bad thing.)

Each of the three books has a satisfying semi-conclusion, but they are tightly coupled and must be read in order. The first book, Ancillary Justice, is the most challenging (and rewarding), partly because there is so much to learn about this fictional universe that we are always juggling multiple open questions. The second and third books are easier, with more linear narratives. The second book is the weakest—although still good—with Breq becoming a bit too holier-than-thou, and the Lord of the Radch missing as her foil. It picks up again in the third, with the reappearance of Anaander Mianaai.

There were a few things that bothered me: with antagonists involved in military operations for millennia, the space battle in Ancillary Mercy seems rather lame. Also, given the difficulties imposed on communications by the vast distances of outer space, even allowing for the use of star gates to travel between systems, Anaander Mianaai’s legions of bodies could never have been able to stay in sync. Her split brain problem would have destroyed her long ago. I had a few other quibbles, but the story was engrossing enough that I ignored them.

Trigger warnings: some violence and bad language, and a few non-graphic (so non-graphic we still don’t know who has which set of genitalia) sex scenes.

This entry was posted in Science Fiction, Space Opera. Bookmark the permalink.