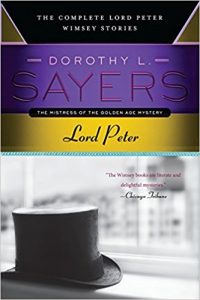 Dorothy L Sayers is the writer most responsible for my ongoing love affair with British mystery novels. Her primary protagonist, Lord Peter Wimsey, may not be my favourite fictional detective—Brother Cadfael wins that honour—but he runs a close second. Written between the two World Wars, the dozen or so novels plus a number of short stories featuring him were set contemporaneously in the UK. The cultural backdrop would have been familiar to Sayers’ initial audience, but was far enough removed in both space and time to fascinate me, when I first encountered them as an American teenager in the 1970s. I enjoy these books as mysteries, but as novels of manners and windows into the world of the British upper classes in interwar period, I enjoy them even more.

Lord Peter is, like some other fictional meddlers, sufficiently well off he can afford to be an amateur detective. He has a good working relationship with the police, but solves mysteries for his own amusement or when called on by friends or family. (His brother, the fictional Duke of Denver, is accused of murder in Clouds of Witness.) Lord Peter hides a sharp mind behind a silly, Bertie Wooster-like persona. He is, perhaps, an upper-class British counterpart to Columbo, lulling the suspects into complacency by his bumbling manner.

Sayers’ prose is rich, polished, and full of understated humour. She is a highly literate and intelligent writer, who trusts her readers to be literate and intelligent, too, and she doesn’t deal in plot-induced stupidity—a trait that in my household often earns a book a quick trip to the giveaway box by the back door. Her plots are intricate and detailed, although perhaps a bit too detailed sometimes; The Five Red Herrings gets too bogged down in train schedule minutia to be interesting. Aside from that lapse, the plots are generally good, but plots are not generally what I get excited about. Character-driven novels thrill me more, and characterization is Sayers’ strength.

One aspect of the books I most appreciate is seeing how she develops as a writer over the course of a decade and a half. I’m not fond of the first novel, Whose Body? It’s a fairly standard mystery, and Lord Peter is a rather shallow character, coming across as too supercilious and artificial, with affected speech patterns that quickly become irritating. As the series progresses, she tones that aspect down, and adds emotional depth to him, particularly after Harriet Vane enters the picture in Strong Poison. The characterizations are better in Strong Poison, by Gaudy Night they are excellent. The last few—The Nine Tailors, Gaudy Night, and Busman’s Honeymoon—are stories I still enjoy, decades after first reading them, and it doesn’t matter that I already know who did it. Other readers enjoy them, too; The Nine Tailors was on the Crime Writers’ Association’s shortlist for their 2013 poll for best ever crime novel.

If you haven’t read any of Sayers’ books, start with Strong Poison, the short stories in the collection Lord Peter, or The Nine Tailors. Go back and read the earlier ones only if, like me, you get hooked.

Audience: teens and up. No sex, bad language, or gore, and minimal off-screen violence.