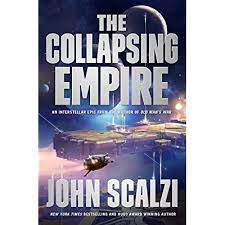 Without faster-than-light transportation, is interstellar travel possible? In The Collapsing Empire, the first book in the Interdependency series, author John Scalzi imagines a strange phenomenon called “The Flow”, unknown to our current physics. Using normal rocket propulsion to reach a region of space where the Flow interacts with normal space, a spaceship can get into the Flow with a carefully-crafted bubble of normal space surrounding it, and be carried along to other star systems in a few weeks or months.

All of known space is part of a network of Flow “streams” connecting the worlds making up the Interdependency, an empire so named because only one planet in the network has all the resources needed to sustain human life on its own. And that one planet—End, Earth is long lost in this universe—is a backwater, the farthest from all other planets in the network, so it’s a good thing that the Flow streams were mapped out more than a millennium ago and are stable.

Except that they aren’t. They are starting to collapse, and within a few years, interstellar travel will be impossible.

I had not read anything else by Scalzi before this book. I first took note of it when it was mentioned in a panel on climate change at CoNZealand, so I suppose I was expecting a focus on either (a) the moneyed interests’ resistance to any change that disturbs their position at the top of the pile, or (b) the impacts on the billions of ordinary people being lied to and abandoned to cruel fate by political leaders unwilling to make hard choices. I was a bit disappointed in that. There are some parallels with the current climate crisis, mostly in terms of people in power unwilling to face up to unpleasant facts, but the focus was less on environmental and societal impacts than on noble families in conflict.

The ruling Wu family has stayed in power for a millennium by extracting tolls and tariffs from their monopoly control of all the entries to and exits from the Flow streams around one central world, Hub. Another ambitious family sees the collapse as an opportunity to take control by establishing the same monopoly around End—under the mistaken assumption that the streams will simply shift, and not dry up completely—and has no scruples about using any means to accomplish that goal.

There are three main characters in The Collapsing Empire:

Cardenia and Marce are fairly standard characters: the underestimated ruler who grows into the job, the charming nerd. Kiva is more entertaining—she is ruthless, conniving, quick-thinking, and even occasionally exhibits a conscience—but plot, not characterisation, is this book’s strong point.

One other thing of note about this series is the gender neutrality. Women hold positions of power—emperox, head of the church, heads of merchant families—without questions about their competence. Many of the major players, both protagonist and antagonist, are women. A butt-kicking sister looks after her gentle brother. The over-sexed Kiva will get it on with just about anything that moves.

On the other hand, Kiva takes advantage of her position to get her employees into bed with her—a trait that isn’t more forgivable when a woman does it than when a man does. So, boo.

Aside from that, this is a fun, easy read, with hissable villains, witty dialogue, and some great action sequences. Good modern space opera, in other words. Warning: this first book ends on a bit of a cliffhanger. If you enjoy it, you’ll probably want to go on immediately to the second book in the series, The Consuming Fire.