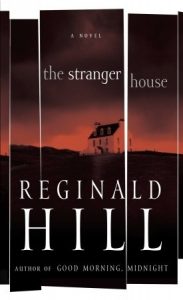 Young Australian mathematician Sam (Samantha) Flood comes to the small Cumbrian village of Illthwaite looking for information about her grandmother, also known as Sam Flood. The older Sam emigrated from the U.K. in 1960 and died in childbirth only a year later, leaving Sam’s father an orphan. The locals Sam encounters deny knowledge of any Floods ever living in Illthwaite; it’s only by chance that Sam comes across a weed-obscured epitaph carved into the church cemetery wall:

Here lies Sam Flood
Whose nature bid him
To do much good.
Much good it did him.

The Sam Flood the epitaph references was a curate who had come to the village late in 1960, after the present day’s (circa 2005) Sam’s grandmother had already gone. A coincidence? Of course not. (This is a novel, after all, and the Law of Conservation of Detail applies.) Somehow, though, the villagers almost convince Sam that it is. Almost.

Meanwhile, the half-English/half-Spanish Mig (Miguel) Madero also arrives in Illthwaite, looking for information about a much older mystery in his own family: the disappearance of his ancestor, also named Miguel Madero, who had come to England with the Spanish Armada in 1588. Mig, too, is being stonewalled, but as he and Sam keep digging, they uncover some ugly secrets. Multiple mysteries—one from more than four hundred years ago, two from a little over forty—intertwine, and are still influencing current events. Sam—logical, incisive, and outspoken—insists on knowing the truth, a truth that someone, not so long ago, was willing to commit murder to hide.

If you are willing to accept a certain amount of magical realism (Mig, a former Catholic seminarian-turned-historian, see ghosts, and his sensitivity to the paranormal guides him in his search for clues), The Stranger House is an absorbing read. One of English crime writer Reginald Hill’s last works, it is an intricately plotted novel, with a well-drawn and entertaining cast of secondary characters, including a blacksmith/artist named Thor, a motherly innkeeper, a pair of very odd twins, and a retired cop (my favourite of the lot) who reminds Sam of a superannuated leprechaun.

I am slowly working my way through Hill’s Dalziel and Pascoe series, but The Stranger House is a standalone, without recurring characters. Hill’s writing is a pleasure to read, never losing sight of the plot, but full of humour and details fleshing out the setting and characters. The book is replete with throwaway lines like: Her eyes moved over Sam with the measured indifference of a security scan. Hill’s vocabulary must have been enormous; he is one of the few authors I regularly read who forces me to keep a dictionary at hand. (Whether you think that’s a positive or negative is up to you. Many of the unfamiliar words can be sussed out from context, but sometimes it is nice to know. Maybe I should read more of them on my e-reader, with its built-in dictionary.)

The book did include a few things that annoyed me, one of them being the not-really-believable romance between the two main characters, and another the frequent head hopping, sometimes moving from one character to another and back within a single page. There was also a sprinkling of Norse mythology (quotations from the Eddas, etc.) that felt rather forced and mostly superfluous to the plot. Related to that, the least successful secondary character was a chilly professor of the subject who never felt like a real person.
(Spoiler.)

Sam’s behaviour, however, didn’t bother me. (I’m commenting on this because several reviewers on goodreads called her rude and unlikable.) I thought she was someone I would enjoy talking to. She started out reasonably polite, although frank and a bit irreverent, but with a chip on her shoulder towards the Catholic church (an understandable one, we find out later). Within a couple of hours of arriving in Illthwaite, four people lied to her and a fifth unseen person caused a fall that could have killed or seriously injured her. Wouldn’t you be angry? By the time she understands what really happened to her grandmother, she is ablaze with righteous anger and determined to dig out the truth, by whatever means is necessary. Calling her rude feels like an application of the old double standard, where anger is acceptable in men but not in women.

By the way, the story of what happened to Sam’s grandmother builds on the real history of the Home Children. Between the 1860s and 1970s, some 150,000 poor children were shipped from the U.K. to other parts of the Commonwealth—Australia, New Zealand, Canada, etc. The stated aim was to give them a better life, and for some it did, but thousands were mistreated and overworked, and many were forcibly separated from extant families. Not a very laudable episode in British history.