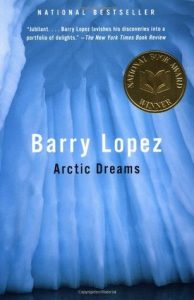 I learned this week that Barry Lopez, the American scientist and nature writer, died on Christmas Day 2020 at the age of 75. His magnum opus, Arctic Dreams: Imagination and Desire is a Northern Landscape, is a classic work of nature writing, and won several awards the year it was published (1986), including the National Book Award for Non-Fiction. Arctic Dreams drew on his experiences over five years working as a biologist in the Canadian Arctic, but as one literary critic* said, it “is a book about the Arctic North in the way that Moby Dick is a novel about whales.”

In his own words, Lopez described Arctic Dreams as a narrative with three themes:

The influence of the arctic landscape on the human imagination.
How a desire to put a landscape to use shapes our evaluation of it.
And, confronted by an unknown landscape, what happens to our sense of wealth.

What does it mean to grow rich? Is it to have red-blooded adventures and to make a ‘fortune,’ which is what brought the whalers and other entrepreneurs north?

Or is it, rather, to have a good family life and to be imbued with a far-reaching and intimate knowledge of one’s homeland, which is what the Tununirmiut told the whalers at Pond’s Bay wealth was? Is it to retain a capacity for awe and astonishment in our lives, to continue to hunger after what is genuine and worthy? Is it to live at moral peace with the universe?

The book covers a large range of topics in its 400-odd pages. The early chapters focus on the wildlife (narwhals and right whales, muskoxen and polar bears, snow geese, …) described in carefully observed and finely written detail. The middle chapters talk about the impacts of the landscape on vision, imagination, and the arts. Physics and geography get their turns, too, with explanations of the season-long days and nights; aurora borealis, mirages, and sundogs; stages in the development of pack ice. The final chapters turn to the history of Western (European, American, and Canadian) exploration and exploitation. The native peoples, their adaptations to the harsh environment, and their relationships to the other inhabitants and the newcomers are woven throughout. Woven throughout, also, is Lopez’s own relationship with the arctic and what it meant to him.

I read Arctic Dreams soon after it was published, 35 years ago, and it burned in my imagination for a long time afterwards. Revisiting it now, with global warming bringing irrevocable changes as the polar regions warm faster than the rest of the globe, it reads like an elegy. I’m sure there have been many books and essays published since then that update the science or cover individual topics in more depth, but I doubt there has been anything that ties them all together so nicely, or that surpasses its descriptions of human relationships with the natural world.

The prose is dense and beautifully written, the kind that benefits from a slow, reflective read to let your imagination roam and to ponder the questions Lopez raises.

This entry was posted in Science (non-fiction). Bookmark the permalink.