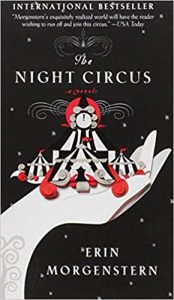 The circus arrives without warning. No announcements precede it, no paper notices on downtown posts and billboards… It is simply there, when yesterday it was not.

London, October 1873. The flamboyant illusionist Prospero the Enchanter proposes a contest to his restrained counterpart, the resolutely inconspicuous Mr A. H-. The contestants are to be Prospero’s talented five-year-old daughter, Celia, and a boy, Marco, that Mr A. H- plucks from an orphanage. Neither magician exhibits any affection or concern for his student, instead turning their childhoods into ghastly ordeals intended to prepare them for their roles in their mentors’ game. Celia’s father slices the tips of her fingers open again and again until she can perform the magic to heal all ten at once. Marco is immersed in arcane studies, isolated from all normal human contact.

Prospero selects a theatrical producer to create a public venue for the contest, although no one other than the two magicians and the contestants are aware of the sinister purpose behind the show. The producer gathers a team of artists and visionaries to create a magnificent circus: the Night Circus, or Circus of Dreams. No one in that team realises how tightly their lives will be intertwined with the circus, a circus whose performers never grow old, and who can never leave.

The circus opens in 1886 with the adult Celia as the circus’s illusionist and Marco the producer’s assistant, and the game begins. The circus is an immediate success, and attracts a dedicated community of fans who follow the circus as it travels from city to city. Years pass, and all seems well, but the strain begins to tell on the contestants, who have never been told the rules or the winning conditions. All they know is that they cannot quit the game…

Book blurbs are often a bit misleading, but the blurb for The Night Circus by Erin Morgenstern is further off target than most. Among other dubious statements, it says:

Behind the scenes, a fierce competition is underway—a duel between two young magicians, Celia and Marco…

There is no duel. There is, instead, a subtle love story as the two protagonists create ever more fanciful entertainments that over time transform from competitive displays into collaborative love letters, in the face of their mentors’ disapproval. It will come as a terrible shock to them to learn that the game isn’t over until the weaker player dies.

The circus itself is a feast of the imagination, scintillating and hallucinatory. Illuminated by bonfire and starlight, we don’t see the dinginess and forced gaiety that plague real circuses and fairs. Readers can conjure in their own mind’s eyes a circus tent containing a vast and shimmering white desert under a sparkling night sky, or dream of riding living, breathing creatures on a carousel that travels further than the typical small circle.

Celia’s real magic is purportedly hidden behind a screen of sleight of hand to avoid confusing and alarming the customers, but the magic underpinning the entire circus, from the performers who don’t age to the lack of a crew noisily setting up the tents at each stop, is blatant and pervasive. This is more magical realism, with the inhabitants simply accepting the inexplicable, than urban fantasy, with the Knowing hiding the supernatural from the Unaware.

I don’t normally care for fantasies where the world building gets more attention than plot or character development, but here it seems to work. Story-telling is not ignored, but the circus itself is centre-stage. The narrative is non-linear, weaving back and forth between several threads years apart. With the contest playing out over a decade and a half, it doesn’t develop any urgency until the very end, when Celia, driven to the end of her endurance from supporting the weight of magic for the entire circus, discovers a way out. Expect a leisurely stroll through a maze of captivating, sensory-laden spectacles rather than a plot-driven gallop, and you won’t be disappointed.