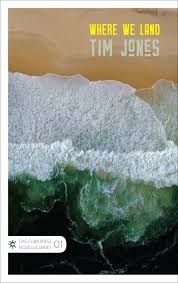 Where We Land, by New Zealand author Tim Jones, deals with the human impact of the worsening climate crisis. Set in the near future with crops ruined and river deltas drowned, refugees are streaming out of Asia in unseaworthy boats, only to be turned away or sunk by the navies of their overwhelmed neighbours. The story alternates between the viewpoint of a single survivor of a Bangladeshi ferry headed for New Zealand and a member of a local militia patrolling the shores to repel people like him. Amid societal brutality and xenophobia, there are still a few glimmers of compassion.

This novella was originally published in ebook form as Landfall, but just been reissued in print under the title Where We Land by The Cuba Press

Audience: anyone concerned about humanity’s future.

This entry was posted in Climate fiction, Kiwi author. Bookmark the permalink.