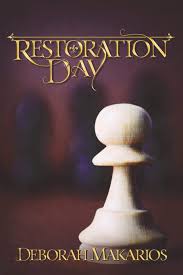 Restoration Day: the ritual that Arcelia’s monarch performs every fifty years to replenish the ties between the land and its people. Without that ritual, the magic sustaining Arcelia will die.

With less than a month to go until Restoration Day, Arcelia’s rightful queen is not prepared. Since the death of her parents fifteen years ago, Lily, days away from her eighteenth birthday, has been kept hidden behind a magical hedge in the mountaintop castle of Candra. Naturally, she’s eager to assume her duties as queen, and escape the stultifying tyranny of her aunt’s regency. Aunt Hortensia has been doing a reasonable job of overseeing Lily’s education in the things a respectable young lady needs to know—the arts, sciences, deportment, dancing, elegant conversation, etc.—but what she has kept from Lily could have disastrous consequences.

Like the fact that, after having murdered her parents, Lily’s evil Uncle Phelan rules Arcelia, plundering it for profit, and will not be pleased when Lily, long thought dead, reappears. Or the fact that the land is already dying under his greedy abuse.

When Lily defies Aunt Hortensia and escapes through the hedge, she expects to be greeted by swarms of her loyal, cheering subjects. She’s not prepared to be a fugitive, attempting to stay one step ahead of Uncle Phelan brutal troops, on her quest to reclaim the throne and gather the magical artefacts needed to complete the ritual before it is too late.

Uncle Phelan, believing she has fled back to Candra, besieges the castle and demands the castle staff hand her over to him. The outmanned loyal retainers put up a strong defence, but will they be able to buy her enough time?

I confess I was not impressed with the opening of Restoration Day, by New Zealand author Deborah Makarios. I was afraid this was going to be one of those books that tries too hard for laughs by stretching clichés (the too-sheltered royal heir, the unwilling-to-let-go regent, etc.) to the breaking point. Lily seemed too childish for eighteen, and both too constrained and too clueless to be a respectable ruler. In our introduction to her, Aunt Hortensia is scolding her for even considering walking down the stairs by herself, as it’s too dangerous. Say what?

(Aside: stairs are dangerous in both make-believe and real worlds. People die or are seriously injured in falls on them fairly regularly. But forbidding children to learn how to handle themselves on hazards they encounter as part of everyday life isn’t a good way to encourage self-confidence and responsible behaviour. If their guardians insist some behaviour is too dangerous, when they see others doing it all the time, why should they believe warnings about other, more risky behaviours? What’s to dissuade them from scrambling across the castle roofs, as Lily does a few pages later to escape her overbearing aunt?)

Despite my misgivings, I skimmed the first two chapters, was intrigued by the third, and by the end of the fourth I was hooked. Lily grew on me, especially once she had left Aunt Hortensia behind and traded her frothy pink princess gown for more practical clothes. She makes some friends, and collects a champion—an unwilling and skeptical champion—who is not a bog standard fairytale handsome prince. As she continues on her quest, she learns a few hard lessons, grows up a bit, and displays a sense of responsibility towards Arcelia and its people that makes up for her other faults.

There are a few standard tropes, but some others are playfully subverted. Some of the dialog, particularly between Lily and the dwarf Malin, had me laughing out loud, and the Home Alone-style defence of Candra had some clever touches. This clean, noblebright fairytale is a fast, easy read with a happy ending.

Audience: fairytale enthusiasts from teens and up.

This entry was posted in Kiwi author, Noblebright Fantasy. Bookmark the permalink.