Fallen Into the Pit 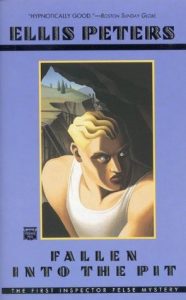 Before there was Brother Cadfael, there was Inspector Felse.

Ellis Peters is well known for her series of historical mysteries featuring the Welsh monk, Brother Cadfael. She began writing those in the late 1970s, but she honed her skills on an earlier series written between 1951 and 1978, featuring an English detective, George Felse. Anyone who likes Brother Cadfael and is not fixated on the Middle Ages might enjoy the thirteen books in this series, too. Set contemporaneously in the U.K., they were not written as historical novels, but given the span of time since then, one can enjoy them as period pieces, appreciating the window they provide into post-war life in Shropshire along the Welsh border.

In Fallen Into the Pit, the first book in the series, the war is over, but the peace is still fragile, and the Comerford village’s inhabitants are still struggling to come to grips with the changes it wrought, both for those families whose sons/husbands/brothers/fathers never came back, and those whose returning sons are all but unrecognisable. Among those is one Chad Wedderburn, a teacher at the school Felse’s thirteen-year-old son, Dominic, attends. Wedderburn is a hero with an impressive war record, but he confounds the villagers’ expectations by spurning their praise, refusing to join the British Legion, and taking an uncompromising stand rejecting all violence.

Some former prisoners of war are also in Comerford. With their homes in ruins and no jobs to return to, they have stayed and been put to work in the coal mines or as hired hands on nearby farms. Among them is Helmet Schauffler, a young German with an attitude problem. He bullies anyone he can, in one case driving a coal miner to take the first swing, then knifing him. To the local authorities he presents a polite face and avoids harsh penalties by pleading self-defence, blaming problems on his inadequate English and prejudice against Germans. But he has antagonised too many people, and when Dominic stumbles across a body lying half in a stream, George Felse is disturbed but not overly surprised that Schauffler has been murdered.

Wedderburn is one of several suspects, and when another man—Wedderburn’s rival for the town beauty’s affections—is found dead, the villagers’ suspicions focus on him. Dominic refuses to believe his teacher is the murderer, and sets out to prove his own theory, which may only make him victim number three…

I don’t love the Inspector Felse books as much as I love the Brother Cadfael mysteries, but there is still a lot to like in them. By current standards for mystery novels, they tend to start off slow, but the in-depth characterisations and descriptions of life in a village where everyone knows each other—and the toll suspicion takes on their sense of community—are significant contributions to the pleasures of reading this author’s work. Chad Wedderburn is an interesting character, as is Dominic Felse.

In an unusual twist, although George Felse is ostensibly the detective, and he and Dominic come to the same conclusion, it’s Dominic’s reasoning we get to follow in the final act. In some of the other books, the inspector’s wife is the main point of view character.

Be warned, however, that there is racist and anti-Semitic language in this particular book. It fits the character, but could be upsetting to some unprepared readers. There is also one minor character with a really unfortunate name. (A tween girl nicknamed Pussy. Ugh.) Despite those and a few other minor quibbles, I enjoyed this very British mystery.

Audience: adults and late teens. Off-screen violence but no sex. Some offensive language.