Years ago, when I was single, I always travelled with a trip diary: a small notebook to record anything I wanted to remember about my experiences. I carried a camera, too, and took photos, but there are many things a camera just can’t capture: overhead comments on a famous painting, the sound of an organist practicing Handel in a nearly empty cathedral, the scent of roses in an English country garden, … Words can’t fully capture those fleeting moments either, but between the two—the photos and the words—I have the triggers to evoke memories years later.

In those days, I usually jotted down the day’s events in restaurants, while waiting for my dinner or while enjoying a cup of coffee or glass of port after the meal. Now, travelling with family, I turn my trip diary into a sort of game, partly to jolly the family along in the sometimes interminable interval between giving our order and getting our food. “What,” I will ask, “do you want to remember about today?” And then I’ll scribble frantically while they call out things that mattered to them—sometimes things I had completely overlooked. Often we’ll have a good laugh, and just as often go off on tangents, talking about history or science or any of dozens of other topics.

So it’s a shame I forgot my little notebook on our short trip down to the South Island last week. Instead, I’ll jot down here a few things that stood out on our circuit from Christchurch to the West Coast and back:

The waterspout over the road to the west of Arthur’s Pass. 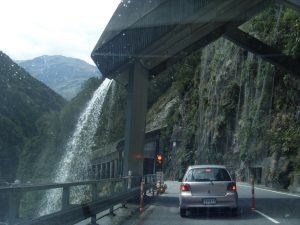 Bruce Bay, where the road runs right along the edge of white surf, and I was glad we passed through in good weather. 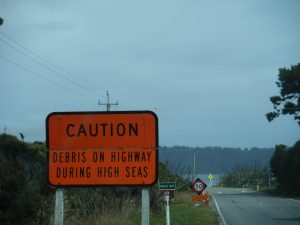 Mist rising from a river, along nearly 180 degrees of our field of view, as a cold front moved in.

Driving through rain and dimming light at the end of a long day, frantically searching for our motel on a secondary road twenty minutes from the nearest town, and the cattle lowing at us from the neighbouring field when we finally found it.

The waterfalls along Haast Pass where other tourists had piled up rocks in the streams just for play, and where our legs were covered with bug bites after a five minute walk.

Bliss over udon, tempura, and pork katsu at the Sasanoki Japanese Kitchen in Wanaka.

The contrast between the temperate rain forest on the west side of the Southern Alps and the arid Mackenzie Basin a few kilometres to the east.

The pleasure of setting out on the open road at the start of the trip, and the equally valid pleasure of coming home to familiar surroundings and a firm mattress.

Of course, I haven’t had time in decades to go through those trip diaries. I have cracked them open on a few occasions to check when we went to a particular spot or to give recommendations to friends. I hope when I’ve been retired a few years I’ll have a chance to get them out and relive those experiences.