Posted on 4 November 2018 by Barbara Howe 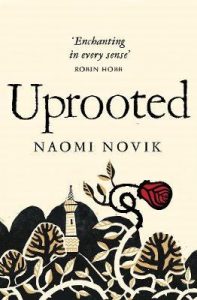 Uprooted, the Nebula-award-winning novel by Naomi Novik, is one of the most captivating fantasy novels I have read in several years. I was hooked within the first page, from the fairytale-like opening paragraphs, and although there are a few things I didn’t like, I couldn’t put it down.

It is, at heart, a war story. It is other things as well—fantasy, mystery, romance—but the core plot is the culmination of a country’s long struggle against a malign, implacable foe, the Wood. Not a mere dim, inert forest, the Wood in this story is an aggressor, acting with intelligence to sow corruption and discord among its fiercest opponents, misleading them into fighting and nearly destroying each other when they should have been united against their common enemy.

Deeply rooted (pun intended) in Polish folk tales, the world-building is superb, calling to mind the days before technology let humans conquer our fears of the dark and unknown with our klieg lights and chainsaws. The days, not so long ago, when we huddled around the hearth, barring the doors and windows against the howling wolves, knowing that the natural world was greater than we were and would kill us without remorse on our slightest misstep. (Those days may be coming back, but that’s an essay for another time.)

We’re given hints about the Wood early on, but it takes time for the sense of menace to grow and take form. I sometimes get frustrated with fantasy’s emphasis on world building, when an author’s love for their imagined world gets in the way of plot and bogs down the story. That wasn’t the case here. The world building is an integral part of the plot as we come to understand what the Wood is and how it came to be that way, and how deeply intertwined the Wood is with everything in the country of Polnya.

The narrator, Agnieszka, is a young woman who grew up in the valley next to the Wood. Even with the Wood looming over them, threatening them on a daily basis, none of the inhabitants except for their overlord, the wizard called the Dragon, understand the Wood’s full threat. When Agnieszka shows herself to be a witch, the Dragon takes her away to train her, as by law he must. Under his tutelage she begins to understand what a danger she would have been to the people of the valley, and indeed to all of Polnya, if the Wood had managed to control her. It’s her organic, instinctual magic, so different from the Dragon’s disciplined use of intellectually complex and long-practiced spells, that pushes the war with the Wood to a new level and brings them within reach of either victory or defeat.

This is a powerful story with some wrenching passages. It is noblebright as well. When Agnieszka makes some impulsive, disastrous choices, it’s always because she’s fighting to save people she cares about. The Dragon is a cold, arrogant ass, but he’s brave and heroic, too, for more than a century stubbornly fighting a losing battle to keep the Wood in check. The villagers Agnieszka struggles to protect are ordinary, decent people, some brave, some not. Even when Polnya is tearing itself apart, the leader of the army attacking the Dragon’s stronghold is not evil as much as misled, another victim of the Wood’s malicious interference.

Despite these flaws, it’s a powerful story. It kept me enthralled on the 14-hour flight from Auckland, to Houston, Texas. I consider that well worth the purchase price.