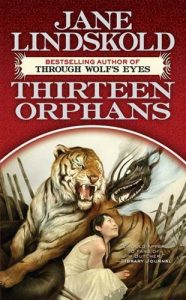 Years ago in the Land Born of Smoke and Sacrifice, a China-like alternate reality, the winners in a war exiled the losers into our reality. The exiles—the young emperor and his twelve advisors, each personifying an animal in the Chinese zodiac—went first to China, but most eventually arrived in the United States, where their oddities were less apparent, and settled down, blending in but not forgetting.

But now, something is attacking the 21st-century descendants of those exiles. The ones attacked are not dead, but have had memories stolen, and it is evident to those who knew them that they are not the same people they once were.

Gaheris Morris, the Rat, is one of those attacked. His 19-year-old daughter, Brenda,  joins forces with the other exiles as the Tiger—Pearl, an elderly half-Jewish former actress—calls them together to defend themselves. Their battles play out among the shopping malls and suburban streets of San Jose, California, with weapons ranging from swords to thrown spell papers. Brenda, who had known nothing about her father’s heritage, receives a crash course on magic and history. If she is going to restore her father’s memories and protect her new friends, she will have to grow into the role of the Rat, and she’ll have to do it fast.

The urban fantasy Thirteen Orphans, by Jane Lindskold, is slow moving and much too talky. Aside from that, there’s a lot to like. The cast is intelligent, diverse, and well-drawn, with both Brenda and Pearl formidable women. The book is filled with details that ground the story in modern America, San Jose in particular, and the Chinese culture-based magic, like divination using personalised mah-jong sets, was appealing. (Lindskold has gotten some flak, I believe, for cultural appropriation. I can’t say whether or not that’s justified. I just know I found it a nice change from the seemingly ubiquitous medieval European-based fantasies.)

But most of all I liked that the Orphans acted like rational adults, banding together and working as a team, something that doesn’t seem to happen often in modern fantasy. (Yes, I know, conflict is necessary for dramatic tension, but some writers throw in so many personality quirks and conflicts that I want to shake their characters and say, “Grow up!”) Even their opponents, once revealed, are mostly honourable people dealing as best they can with a bad situation. That made for a more complex and satisfying conclusion than banishing yet another one-dimensional evil villain would have.

Thirteen Orphans is the first in a trilogy. I haven’t read the others yet, but the second book, Nine Gates, is waiting in my To Be Read pile.

Audience: Adults down through mid-teens. No sex or bad language. Some violence but no gore.

This entry was posted in Noblebright Fantasy, Urban Fantasy. Bookmark the permalink.