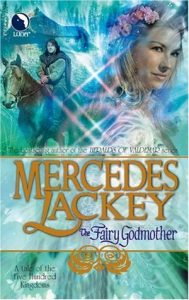 I’ve mentioned before that I’m a sucker for fairy tales. It shouldn’t be surprising then that Mercedes Lackey’s Five Hundred Kingdoms series appeals to me. In this fantasy world, the magic system is The Tradition: a mindless force that tries to push people’s lives down familiar pathways: Sleeping Beauty, the Crystal Mountain, etc.

Unfortunately, The Tradition doesn’t care if the story has a happy ending or a tragic one, and sometimes the pressure pushing someone in one direction builds to the breaking point when the story doesn’t quite fit. Like Elena in The Fairy Godmother who should have been Cinderella, if her prince hadn’t been eleven years old.

This is where the godmothers and other intermediaries between the humans and the fae come in, to steer stories towards happy ending by manipulating or diverting The Tradition, or even occasionally breaking the old patterns and creating new ones.

The Tradition is a clever idea, and the world of the Five Hundred Kingdoms gives Lackey free rein to have fun exploring and combining a wide assortment of fairy tales.  Beauty and the Werewolf, for example, is a mashup of werewolf stories, Little Red Riding Hood, and Beauty and the Beast. The sources are mostly northern European, but she also draws from Greek and Japanese traditions, and possibly others that I didn’t notice.

There are a half-dozen books in this series, starting with The Fairy Godmother, and they are all light, fluffy fun with happy endings. Or maybe not so light—The Fairy Godmother is nearly 500 pages—but they are easy reads, and after blogging about the Children of the Black Sun in the last post, I needed that.

They do, however, have a few problems: