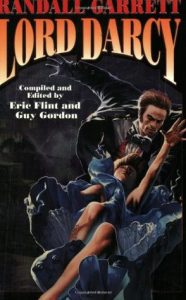 The time: the 1960’s. The place: the bustling port of Cherbourg. A nobleman in the Anglo-French Empire, engaged in a sensitive international inquiry, is missing. Lord Darcy, detective, and Master Sean O Lochlainn, forensic sorcerer, have been summoned to investigate.

This is the setup at the start of A Case of Identity, one of Randall Garrett’s classic Lord Darcy stories. In this alternate world, history diverged with Richard the Lionheart’s return to England. The Plantagenets still rule an undivided empire. The Americas are still colonies. And in the 13th century, the laws of magic were discovered, and the foundation laid for an academic discipline as sophisticated as our physics. Science and engineering, as we know them, are not well-developed in this world, since attention is instead focused on understanding and applying the laws of magic.

The eleven stories (10 short stories, plus one novel, Too Many Magicians, all available in one omnibus volume, Lord Darcy) are interesting enough as Holmesian mysteries, mostly of the locked room variety, but to me the most entertaining aspect is the magic, and the ways in which it both parallels and diverges from the technological marvels of our world. Long distance communication devices are magically-powered telesons, not telephones. Preservator chests keep food fresh. There are no automobiles, but there are steam trains. (This world feels more 19th-century, plus magic, than 20th-century.) And in the forensic sciences, the laws of magical relevancy can be used to determine if a bullet was fired from a particular gun, or to separate dye, deliberately spread, from the accidentally spilled ink it was intended to cover.

The stories aren’t entirely successful. The characterisations are shallow and the dialog often rather wooden. They are repetitious, and suffer from back-to-back readings. Too Many Magicians is too long, and has too little focus on the magic. And the whole premise of the alternate history is preposterous. An unbroken succession of benevolent and wise kings maintaining social cohesion and smoothing out all serious problems for more than 700 years? Yeah, right.

Some readers will be put off by the world’s political implausibility and excessive formality—all references to a person include their titles, the more the better. For other readers, like me, it’s possible to dip into them occasionally, accept their limitations, and enjoy a light, fun read about a world where magic is as real and essential as science.

Audience: Teens and up. A little violence but no sex, gore, or bad language.

This entry was posted in Alternate History, Fantasy, Mysteries. Bookmark the permalink.