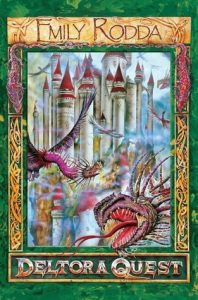 Most of the children’s books I’ve blogged about are ones I read to my daughter. The Deltora Quest series, by Australian author Emily Rodda, is an outlier. My daughter discovered it for herself and read the entire series as a pre-teen. I didn’t read it until years later, when I discovered she was annoyed with me for never having paid attention to her favourite. So when I did sit down to read it, I was primed to expect great things…and was rather taken aback by the less than stellar writing in the early books. But I kept reading, the writing improved, and by the end I, too, had gotten caught up in the story. This fantasy series is—pun intended—a small gem, and a fine gateway for introducing young readers to the fantasy genre.

My daughter enthused over the puzzles and problem solving. There are also vivid descriptions of the land and inhabitants of Deltora, plot twists and cliffhangers galore, and I particularly like the emphasis on teamwork. The three main characters frequently disagree, and don’t always handle their disagreements well, but the challenges can’t be overcome alone. They support each other when things get tight, and don’t hold grudges afterwards over bad choices.

The series was originally published between 2000 and 2002 in eight separate chapter books. It’s now available (and cheaper) as eight parts in one hefty binding, a little over 700 pages.

In the first part, The Forests of Silence, we learn that the kingdom of Deltora is in a long war with the evil Shadow Lord. The kingdom had been protected by a magical belt with a gem—diamond, emerald, lapis lazuli, topaz, opal, ruby, and amethyst—from each of the seven tribes making up Deltora, but the Shadow Lord has subverted the king’s advisors, keeping him separated from the ordinary people and convincing him that wearing the belt all the time is not necessary. In a palace coup, the belt is captured and the gems dispersed. The king and queen escape and go into hiding.

Sixteen years later, Lief, a teenager born soon after the coup, and Barda, a former member of the king’s guard, set off to find the gems with the intention of restoring the belt and helping the hidden heir to the throne overthrow the tyrannical Shadow Lord and his brutal Grey Guards. They encounter Jasmine, a wild but intelligent girl living by herself in the forest after the Grey Guards took her parents, and with her help they recover the first of the stolen gems.

The next six parts follow a similar pattern. Lief, Barda, and Jasmine travel through a different section of the Deltora, defeating monsters, finding friends and allies, solving puzzles, and recovering another gem. Although the structure is repetitious, the descriptions of the seven tribes are imaginative and the individual problems are varied and interesting. There are also elements of an overall story arc woven throughout, and interactions with some ambiguous recurring characters keep it from getting stale. Some plot twists are telegraphed well in advance, but at least one is not.

In the final part, Return to Del, Lief, Barda, Jasmine, and their new allies return to the capital, with the restored belt and a boy they believe is the heir, to confront the Shadow Lord’s agents.

Return to Del has a happy ending, and one could stop reading there, but the war with the Shadow Lord continues in two more collections: the three-part Deltora Shadowlands (or Deltora Quest 2) and the four-part Dragons of Deltora (or Deltora Quest 3). I haven’t read those, but my daughter has, and recommends them.