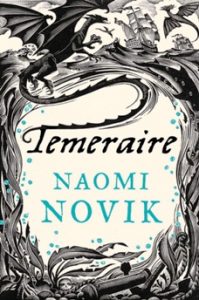 A British ship has just captured a French vessel after an unusually hard-fought battle. Captain Will Laurence is at first contemptuous of the French captain for risking men’s lives by refusing to surrender long after it becomes obvious they are losing, but on discovering the object in the ship’s hold, he understands their desperation. For the French ship is carrying a dragon’s egg—an egg with a hard shell, meaning it is about to hatch.

The British sailors are exultant over their valuable prize, but Laurence is not, as he contemplates the predicament they are in. Three weeks out from Madeira, they cannot possibly reach a safe port and hand the egg over to the British Aerial Corps before it hatches. The ship’s officers, himself included, put their names in a hat for the ‘privilege’ of imprinting the dragon, but when the egg hatches, the dragonet ignores the man chosen. It opts, instead, for Captain Laurence.

This comes as quite a shock to the well-liked and respected captain. He is required to leave his post in the prestigious British Navy and transfer to the necessary but despised Aerial Corps, full of social outcasts. His friends pity him; his father only avoids disowning him because he doesn’t want to inflame the gossip.

This is the beginning of Temeraire (or His Majesty’s Dragon in the U.S.) by Naomi Novik, the first in a nine-book fantasy/alternate-history series recounting the adventures of Captain Laurence and dragon Temeraire in the Napoleonic Wars. Sort of Horatio Hornblower meets the dragonriders of Pern. But unlike the Pern stories, or any other dragon stories I’ve come across, the ariel battles are team efforts, not fought solely by the dragon and its rider. The fighting dragons in Temeraire are the airborne equivalent of frigates, carrying a full complement of riflemen, bombers, midshipmen, flagmen, and a ground crew. (Yes, these dragons are huge. Best not think about how they manage to fly, or the logistics and economics of feeding a fleet of these voracious carnivores.)

The plot is predictable: the pair undergo a series of adventures and misadventures in their Aerial Corps training, with deepening devotion between man and dragon. Laurence slowly sheds his erroneous preconceptions about dragons and their human associates, and wins the respect of his new officers and crew. Napoleon launches an invasion attempt, and the new trainees play a crucial role in the climactic ariel battle.

This is a familiar tale, but well-told, about friendship and devotion. Temeraire is a fine character in his own right, headstrong and competitive but also kind and more intelligent than Laurence. (He speaks both English and fluent French, learned in the shell aboard the French ship.) He challenges assumptions about duty and loyalty that Laurence had never questioned, to the captain’s discomfort, and nudges him towards acceptance of his new status.

Now about that climactic battle… The dragons fight in midair with dozens of people strapped into harnesses on their backs. These dragons are clawing at each other and performing evasive manoeuvres: dropping, jerking sideways, flipping upside down, etc. I would expect everyone aboard to be suffering incapacitating nausea, whiplash, disorientation, maybe even concussion. But no, they go on about their work without goggles or other protective gear. Worse, while Temeraire is grappling with another dragon, a boarding party leaps from his back onto the other dragon. That’s when I started hooting. That untethered leap was a huge leap of faith, to expect to hook into the other dragon’s harness in mid-flight. If they miss their grab, or an enemy airman pushes them off, or the other dragon bounces a bit, they’ll all going sailing off into the blue, to drop into the English Channel far, far below.

The battle was definitely entertaining, although maybe not quite in the way the author intended. (Am I really the only reader bothered by that reckless leap?)

In short, this is good, clean swashbuckling fun, if you don’t take it seriously.