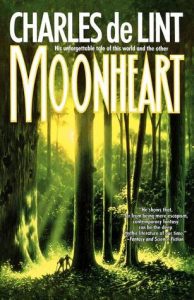 Of all the settings in all the thousands of books I’ve read, Tamson House in Ottawa, Canada is among the ones I’d most like to visit. That world-straddling residence is a significant presence in the urban fantasy Moonheart by Charles de Lint. At least semi-sentient, it’s better developed than most of the human characters. It’s a massive structure, covering a full city block, but the facade facing the street presents it as a row of townhouses, camouflaging it’s true nature. The garden it surrounds is larger than any garden hemmed in by walls and streets could possibly be. The house is home to a collection of characters living more or less communally, including the owner, Jamie Tams, his niece, Sara Kendell, and a biker, a live-in gardener, and a few other oddballs. Various other visitors move in and out more or less at random—anyone the house takes a fancy to stays as long as they want. Neither Jamie nor Sara pay them much heed; the house itself seems to somehow enforce unspoken rules about residents cleaning up after themselves and playing nice with each other.

Besides owning Tamson House, Jamie and Sara own an antiques store. It’s more of a hobby than a real business, as they are independently wealthy and don’t need the extra income. (I kept thinking they had to be fabulously wealthy to afford the upkeep on this huge house, but perhaps the house itself has a hand in its own maintenance. I wasn’t quite sure about that.) The story opens when Sara uncovers some unexpected items in a recently-delivered box of knickknacks, items that draw the attention of the Horsemen (the Royal Canadian Mounted Police).

In another thread, the Horsemen are also showing interest in Kieran Foy, a wandering folk musician and wizard in training—even if he’s not sure exactly what the magic is—who has come to Ottawa in search of his missing mentor. When Kieran and Sara’s paths cross, trouble happens, in a big way, as a more than thousand-year-old feud goes critical. Kieran and Sara are spirited away to an Otherworld, populated by Native American shamans and manitou (spirits) interwoven with ancient Welsh bards, where they begin to piece together the clues needed to understand and counter the evil that is harming both worlds.

While Sara and Kieran are in this Otherworld, learning how to handle newly-discovered powers as wizard and sorceress and falling in love—although not with each other—Tamson House is under attack. As Jamie comes to terms with the part his ancestors played in creating the situation they’re in, a multiway battle for control of the house is underway between a motley assemblage of residents, Horsemen, gangsters, and He-Who-Must-Not-Be-Named The-Dread-That-Walks-Nameless. (Sorry, couldn’t resist, but Moonheart was published in 1984, long before that other story.)

This thread set in modern Ottawa, with its ensemble cast—sometimes working together, sometimes at cross purposes—was the more interesting storyline. The other threads didn’t move me as much. There was a bit too much New Age romanticism for lost Native American traditions for my taste in the interactions with the high-minded inhabitants of the Otherworld, and neither of the two romances felt particularly gripping or believable. Oddly, though, relationships between other, minor characters were more believable—the Mountie and his lawyer girlfriend, or the biker and his girlfriend—probably because the author was taking already established relationships as a given, and seeing how they changed under stress.

There were some minor flaws: a few continuity errors, so many characters I needed a scorecard to keep track of who’s who, and it’s at least fifty pages too long (out of 477), but overall it’s an intriguing story.