Posted on 9 December 2017 by Barbara Howe 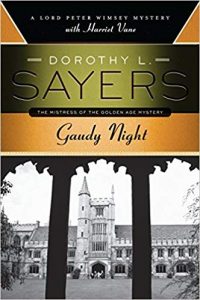 I’ve already written about Dorothy L Sayers’ Lord Peter Wimsey mysteries, but Gaudy Night, the penultimate book in the series, deserves a post of its own. Gaudy Night does not conform to genre conventions. Yes, it is a mystery, but it is also much, much more: a literary novel containing a story of a woman coming to terms with both her past and her future, a reflection on a writer’s role in giving life to fictional characters, and one of the best romances I’ve ever read, between Lord Peter and Harriet Vane.

Although Lord Peter appears in it, it’s really Harriet’s story. Returning to her alma mater at Oxford for an alumnae reunion (the titular Gaudy Night), Harriet is apprehensive about how she will be received. She has, after all, in the years since she graduated, been on trial for murder and had her scandalous personal life splashed across the tabloid headlines. (Remember that in the 1930s an unmarried woman living with a man would be a social outcast.) On her arrival, she is surprised to find that the dons (the teachers) are glad to see her. Shortly afterwards, when a nasty prankster with a poison pen begins making trouble at the college, they ask for her help. Harriet returns and takes up residence, ostensibly doing research for a book, but really to nose out trouble. She turns to Lord Peter for help as the malicious behaviour escalates, and she herself is attacked with murderous intent.

Anyone looking for a fast-paced thriller with lots of gore, forget it, and if you value plot over character development, this probably isn’t for you either. By modern crime novel standards, Gaudy Night is slow-moving and almost non-violent. One character is driven to attempt suicide and Harriet is injured, but no one dies.

Personally, I remember characters, not plots. If a writer’s work doesn’t include memorable characters, I won’t be back for more, no matter how intricate or surprising the plot is, but this book is one I have reread several times. Part of the appeal, particularly for aspiring writers, is watching Harriet struggle to bring her fictional characters to life, to make them well-rounded, believable human beings. Harriet Vane can be seen as Sayers’ alter ego, wrestling with the same problems Sayers wrestled with, and, we might hope, succeeding as well as Sayers did.

Audience: Teen and up. No sex, minimal violence.