Turning over a new Leaf 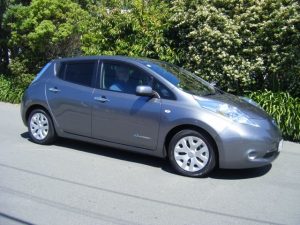 I’ve turned over a new Leaf, and will no longer be burning fossil fuels on my daily trek to work.

To be accurate, my all-electric Nissan Leaf is not new; it’s a 2014 model with 40,000 km on the odometer, but it’s new to me, and I’m enjoying it. It’s fun to drive. Due to technology limitations and trade-offs between battery weight and range, older electric cars had a reputation for being a bit pokey, but that’s no longer true. If you don’t believe it, watch this video of the first electric car to win the Pikes Peak Hill Climb (2015). Don’t watch if you’re prone to motion sickness. (I’ve been up Pikes Peak, by the way. That road gave me the willies even at a crawl.)

The car in that race was a one-of-a-kind, to be sure, but these days high-end electric cars perform as well as high-end conventional cars. My family sedan isn’t a Tesla, but when I stomp on the accelerator, it moves. It’s got more than enough pep for a commuter car, and it sails right on up Tinakori hill, at the end of my homeward journey, with much less obvious effort than my old car did.

Electric vehicles (EVs) may be pricier up front, but are less expensive to run, especially when you factor in lower maintenance costs from fewer moving parts. A recent study by the Union of Concerned Scientists shows that even in the U.S., where gasoline is cheaper than the global average[1], EVs are a good economic choice as well as being better for the environment. As the cost of solar power continues to drop, battery technology continues to improve, and as more EVs become available, the cost of ownership will keep doing down. Here in New Zealand, where most of our electricity comes from renewable sources, the choice will soon be a no-brainer. EVs are the future.