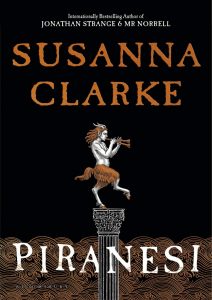 Piranesi’s house is no ordinary building: its rooms are infinite, its corridors endless, its walls are lined with thousands upon thousands of statues, each one different from all the others. Within the labyrinth of halls an ocean is imprisoned; waves thunder up staircases, rooms are flooded in an instant. But Piranesi is not afraid; he understands the tides as he understands the pattern of the labyrinth itself. He lives to explore the house.

Piranesi’s world seems like something from a fable, or perhaps a fever dream: a vast, world-encompassing building filled with statues, like some monumental European art museum. The only things outside the House are the sun, moon, and stars. It rains inside, and snows in winter. Some parts of the House are in ruins. The upper floors are lost in the clouds and the lower floors are awash in salt water. As far as he knows, there have only ever been fifteen people in the world, thirteen of them dead. He does not often see the other living person, a well-dressed man he calls “The Other.” Piranesi spends his time harvesting seafood from the ocean in the lowest level, or wandering the halls, recording what he finds in a series of journals. He is alone, but not unhappy.

At first glance, categorising the novel Piranesi as a fable or allegory might make sense, because otherwise there are too many questions: Who built the House? If the narrator has been alone all his life, how did he survive? If he’s never been outside of the House, how did he recognise the subjects of statues like Woman Carrying a Beehive, or An Angel Caught on a Rose Bush?

But if this is a fable or allegory, it is an odd one. The current entries in his journal are dated in “The Year that the Albatross came to the South-Western Halls”, but earlier journals are dated 2011 and 2012. His possessions include a sleeping bag, plastic bowls, and bottles of multivitamins. He meets The Other at 10 o’clock on Tuesday and Fridays mornings to discuss his progress in their mutual search for the Great and Secret Knowledge hidden somewhere in the House. In their meetings, The Other gazes at a shining device that is clearly a cell phone or tablet.

There are gaps in Piranesi’s journals, and in his memory. He tells us that The Other is his friend, but The Other doesn’t treat him like one, berating him for his lack of diligence in their quest. As Piranesi re-reads and tries to make sense of the older journals, other scraps of knowledge about our world trickle in, raising more questions about his relationship with The Other. And then The Other warns him that a third person—a very dangerous person—may be wandering about the House. The story takes on urgency and a more sinister cast, and it is now obvious that this story is both fantasy and mystery.

Piranesi, by Susanna Clarke, was a nominee for Best Novel in the 2021 Hugo Awards, sixteen years after Clarke’s earlier novel, Jonathan Strange and Mr Norrell, won in that same category. The books share a common theme: the silencing of marginalised people. In Jonathan Strange…, none of the other characters recognise Lady Pole’s or Stephen Black’s entrapment by the uncaring fairy. In Piranesi, well, that’s a spoiler. Unlike Jonathan Strange…, however, Piranesi is not an 800-page glacially-paced doorstop. The print versions are around 250 pages/64K words—quite small, by fantasy standards—and there are no footnotes. It does start off a little slowly, but once it gets going, it’s compelling. I read three-quarters of it in one day.

Piranesi, by the way, is a nickname given the narrator by The Other, even though he knows it is not his name. It’s a joke at the narrator’s expense; Giovanni Battista Piranesi was an 18th-century Italian artist whose most notable output was a series of prints called Imaginary Prisons.)

A canny reader will figure out at least a few of the answers to the mystery long before the narrator does—and perhaps want to give him a good, hard shake for his naïveté—but that’s okay; the story is captivating even when you know where it’s going.

When Piranesi was published in 2020, the descriptions of it didn’t encourage me to read it. What I gleaned from the early reviews made it sound like an over-hyped exercise in writerly indulgence. And then I read an excerpt, and was intrigued enough to get a copy and read the full thing. I’m quite happy to say that my initial impression was wrong. Piranesi is a magnificent exercise in world building, but it is much more than that, with excellent characterisations and a satisfying plot. However you want to categorise it—speculative, literary, alternate worlds, mystery—this is first-rate fiction, lyrical, imaginative, and haunting.

This entry was posted in Fantasy, Mysteries. Bookmark the permalink.